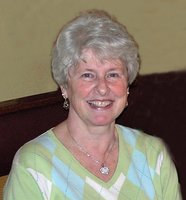 Rita A. Doherty, a woman with a generous heart, passed away on Friday night, February 7, 2020 at the age of 78. Rita was born in Medford. She was the daughter of James and Mary Ellen Maher. She grew up in Medford and was a graduate of St. Clement High School. After high school, her family moved to Woburn. She took a position at an insurance company in Boston. She would take a train from North Station to Woburn each day. She was simply stunning. Her future husband, Edward Doherty, would see her at the station each day always wishing to have the courage to ask her out on a date. Months went by without even a hello. Finally, 8 months later, Rita and her girlfriends stopped at a pub in Dorchester after visiting the Mission Church for a Novena. Ed happened to be there with his friends and knew he had to take the opportunity to get to introduce himself to the girl he had admired from a far. A romance blossomed and they married in 1969. Ed has never stopped being thankful that she chose him to be her husband. The family settled in Burlington in 1972. When Rita had her son, Kevin, she gave up her career to be a stay at home mom. She kept a meticulous home and dedicated her life for caring for her boys. She loved her neighborhood and neighbors who became lifelong friends. There were countless family vacations to Cape Cod and numerous cruises to warm weather destinations. In recent years, “Date nights” happened 3 or 4 nights a week. The Newtowne Grille and Emerald Rose were some of her favorite restaurants. She could order without even looking at the menu and the staff and customers were like old friends. Rita was also known for her shopping skills. She was always on the hunt for the best deals. She knew the in and outs of every store in the area. Her best deals often came from Marshalls and T.J. Max retail stores. She could have had a great business as a personal shopper, because she shopped not just for herself, but all her family and friends. Rita’s thoughtfulness, devotion to others, and love she showered upon those she cared for will always keep a special place in the hearts of all those she has touched during her lifetime. Rita was the beloved wife of Edward W. Doherty. She was the loving mother of Kevin Doherty & his wife Nicole of Burlington. She was the proud Nana to Madison and Caitlin Doherty. She was predeceased by her siblings; Mary Palange and James Maher. She was the sister-in-law of Pat & Ed DeGraan of Hingham, the late Paul Palange, Thomas and Noreen Doherty. A visitation will be held at the Edward V. Sullivan Funeral Home, 43 Winn St., Burlington (exit 34 off Rt. 128/95, Woburn side) on Thursday, Feb. 13 from 4-8 p.m. Funeral from the Sullivan Funeral Home on Friday, Feb. 14 at 9 a.m. Followed by a Mass of Christian Burial in St. Margaret Church, 111 Winn St., Burlington at 10 a.m. Services will conclude with a burial in Pine Haven Cemetery, Burlington. Memorials in Rita’s name may be made to People Helping People, P.O. Box 343, Burlington, MA 01803.