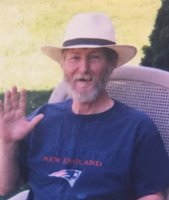 Paul William Young (December 1951- February 2020) of Bedford, Massachusetts, died from complications with pneumonia after a hard-fought, three week battle to stay with his friends and family. He passed peacefully in the morning of February 23, 2020 at the CCU of Lahey Hospital. *The man behind blue eyes is finally at peace.* Paul loved ice-cold Pepsi, chain-smoking, steak and cheese subs, rock music at full volume, Patriots football, fried clams, Robin Williams and Jack Nicholson movies, telling terrible knock-knock jokes and talking to his daughter Sarah. Paul battled daily with the symptoms and stigma of mental illness and alcoholism recovery but he remained compassionate, generous and insightful. He was a devoted, adoring father, an incredible writer and faithful friend. He will be missed deeply. Paul is preceded in death by his parents Albert and Monica (Pessotti) Young, his brother Michael, his ex-wife and constant friend Pamela Young-Poindexter and their first-born daughter Rachel Emily. Paul is survived by his brother Daniel, his sisters-in-law Beth Ann, Beth and Barbara, several nieces and nephews and by his daughter Sarah. Per Paul's request, there will be no funeral or formal memorial. His body will be cremated and his ashes will be buried near his daughters'. Paul was as funny as he was generous. He loved helping people out, when he could. In lieu of flowers or visitation, his daughter asks that you consider doing something kind or generous for someone who needs it in his honor. It's the best way to celebrate his life.