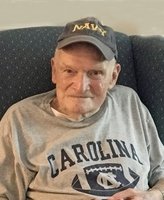 He was married to Joan M. (Morgan) Ghio of Portsmouth, RI on March 26, 1951 who he had met when they attended Bryant College in Providence, RI. To marry his “Joan Marie” Jules converted to Catholicism and remained a man of strong faith throughout his life. During their 48 years together they built a loving marriage and good life until Joan’s death in 1999.

Jules is survived by his six children:  Karen Poulin and her husband James of Carver; Stephen and his wife Eileen of Princeton; Andrew and his wife Beth Ann of Chapel Hill, NC; Paul of Gardner; Peter and his wife Noreen of Burlington and David and his wife Sharon of Burlington.  Jules is also survived by his sister Geraldine Hamel of Rutland, VT ; his brother-in-law Paul J. Morgan and wife Sue of Edgewater, FL and his sister-in-law  Mrs. Harriet O’Dell of Vero Beach, FL. Jules and Joan were the proud grandparents of sixteen grandchildren. Jules also welcomed five great-grandchildren to his family. He sorely missed the company of his three predeceased siblings – Joyce (Ghio) Mainolfi, Alfred and Carl Ghio.  Most of all he missed his Joan Marie – the love of his life.

Jules enlisted in the U.S. Navy in 1946. He received training to become a Hospital Corpsman. This allowed him to work at several different bases and on Liberty Ships. After close to 7 years, including the Korean Conflict, Jules was Honorably discharged in 1953.

What stands out in his children’s’ memories of their young years are the many hours their father worked providing for his large family. But there was also time for beach trips and visits with relatives and friends.  He loved his siblings and enjoyed their company when he could share it. He loved his time with his extended family and especially enjoyed the Florida vacations he shared with Joan’s sister Harriet and her husband, Blaine.

Jules, along with Joan, were active church members of St. Margaret’s in Burlington. Both served on many Boards and assisted in the CCD program over the years. It was a great source of Pride and Joy to be part of the vibrant Parish along with their many friends and family.

In lieu of flowers memorials in Jules’ name could be a contribution to People Helping People, P.O. Box 343, Burlington, MA 01803.

Funeral Services will be private due to the current health crisis.