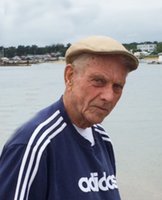 The above link will bring you to our facebook page (sign-in is not required).  Graveside Services will begin streaming at Noon on Tuesday, September 8th.

James N. “Doc” Doherty, Jr., a lifelong resident of Woburn, passed away at his home on Wednesday morning, September 2, 2020. Doc was the beloved husband of the late Loretta May (Donovan) Doherty, who passed away in December.  Doc had just celebrated his 85th birthday in July.

Doc was born and raised in Woburn. He was the son of the late James and Madeline Doherty.    Doc was a graduate of Keith Academy, a catholic school, located in Lowell.  He would meet his future wife Loretta, while at his sister Sheila’s 16th birthday party.  They married on September 28, 1957.  Doc enlisted in the United States Air Force and served his country from 1956 to 1960.  He was stationed at Cannon Air Force Base in New Mexico.   After the service Doc and Loretta moved back to their hometown of Woburn where they would raise their three children and become very involved in the community.  Doc had a career that spanned over 34 years as a Lineman with Nstar formerly Boston Edison.

Doc was a loving and supportive husband and father. He was always there for his three children.  Doc was a gifted man and was a “jack of all trades. He shared his many talents with his three children.  Thanks to their dad they were all proficient in electronics, plumbing and mechanics!  As a family they enjoyed vacationing in Biddeford Maine, renting the same vacation home for over 25 years.  In later years Doc and Loretta enjoyed vacationing at their timeshare in Naples Florida.

Doc was never one to sit idle.  He had many interests and hobbies.  Doc, along with his three children, was a lifetime member of the Woburn Elks.  He appreciated the outdoors, had a passion for fishing and enjoyed his daily walks around Horn Pond wearing his trademark “scally cap”.  He was a Crossing Guard for the Woburn schools for over 10 years.  Doc loved his daily interaction with the students and they all adored him.

Doc’s greatest passion was his family. He adored his four grandchildren who brought immense joy and happiness to his life.  Doc was an important part of their lives. He would pick them up from the bus after school, never missed any of their school events and they always looked forward to breakfast with their grandfather.     In recent years Doc devoted his time to taking care of his wife Loretta whom he shared 62 years of marriage with.    Doc will be remembered for his love of family, love of life and his outgoing personality.

Doc was the beloved husband of late Loretta May (Donovan).  Loving father of Kimberly Doherty & her partner Jane O’Reilly of Woburn, James Nelson Doherty, III & his wife Elke of Woburn and Dwayne Doherty & his wife Lisa of Tewksbury.  Proud grandfather of Christina, Lauren, Liam & Aidan.  Brother of Thomas Doherty of Saugus, Noel Doherty of Woburn and the late Sheila Tomkins.    Graveside services will be held at Woodbrook Cemetery, 100 Salem St., Woburn on Tuesday, Sept. 8 at Noon.  Due to the current health conditions, the family will have a celebration of Doc’s life at a later date.  Family and friends respectfully invited to attend.    In lieu of flowers memorials in Doc’s name may be made to the Elhers-Danlos Society, 1732 1st Ave #20373, New York, NY 10128  www.ehlers-danlos.com