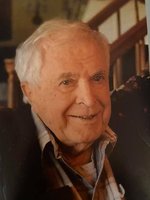 The link above will bring you to our facebook page (sign-in is NOT required), to view the funeral mass at 10am Tuesday, Sept 15th.

Richard Joseph Hanafin, a retired Metropolitan District Commission Police Officer, passed away after a long illness on Thursday morning, September 10, 2020.  He was 88 years old. Richard was born in Cambridge, the son of John and Marie Hanafin.  He grew up in Cambridge and was a graduate of Cambridge Rindge Technical High School.  He enlisted in the Army at the age of 17 in August of 1949.  On June 25, 1950, some 75,000 North Korean soldiers crossed the 38th Parallel to start the Korean War.  Richard’s Army Regiment was quickly sent to Korea where they saw extensive combat in the first years of the war.  Richard held the rank of Corporal.  He was injured during his almost 2 year tour in Korea  He was the recipient of the Korean Service Medal with three Bronze Stars, which meant he participated in three of the thirteen major military campaigns during the War.  He was very proud of his service to his country and supported all service men and women through his membership in the American Legion, Veterans of Foreign Wars, and Disabled American Veterans organizations.  He regularly attended Memorial Day and Veterans Day ceremonies, and many other events recognizing his fellow Veterans.

Richard was a patrolman in the Metropolitan District Commission, now the Massachusetts State Police, where he served for 25 years.  He worked in the Boston, Revere, and Medford barracks during his tenure. Richard was the type of officer who loved engaging with the community, had a sympathetic heart, and loved his role of serving and protecting the residents in the communities he served.  His children saw his role and value to the community and when they grew up, one became a police officer and two chose to be firefighters all in Burlington.  His retirement years were spent driving limousines at funerals and working as a funeral assistant at local funeral homes including the Sullivan Funeral Home.

Richard was a man of deep Catholic faith.  From a very early age, he attended daily mass whenever possible.  St. Margaret’s Church has been a very important part of his life since moving to Burlington in 1956.  He saw his children and his grandchildren receive all their sacraments there.  His grandchildren all asked him to be their Sponsor when they received Confirmation.  He also served as a Lecturer and Eucharistic Minister at both Sunday and daily masses for decades.  In his final days, it gave him great comfort and solace to have his old friend, Reverend Peter Shen, there to give him the Catholic Church’s last rite, The Anointing of the Sick or Last Rites.  After that, Richard was at peace and prepared to meet his God.

Richard was a man devoted and so proud of his family.   He made a point to be deeply involved in each one of their lives.  Growing up there were family vacations, Sunday dinners, rides to the Mohawk Trail, huge family and holiday celebrations, and daily family activities.  He backyard was a bit of a farm with goats, geese, homing pigeons, cats and dogs.  He was always at his children’s school and sporting events.  He was the father who would pack all the neighborhood kids into a station wagon and take them for ice cream.  In recent years, big family vacations with his children and grandchildren were spent at Old Orchard Beach and York, Maine.  Nothing made him happier than seeing his family together, enjoying each other’s company, laughing, and keeping the family bond strong.  Richard lived a great life.  He always balanced his work, faith, and community.  He has been a wonderful role model to all his children and grandchildren. He will be missed, but will be always remembered in all the hearts of those he loved.

Richard was the loving husband of 64 years of Noreen (Anderson) Hanafin. He was the loving and proud father of the late Kevin, Brian & his wife Debbie of Woburn, Eileen Ferren & her husband Jack of Burlington, Richard & his wife Noelle of Burlington, John & his wife Beverly of Burlington, Michael of Wilmington.  Proud grandfather of Matthew, Daniel, Kerry, Jessica, Patrick, Monique, Christina & Thomas Hanafin, Brittany Montalto and Shayla & Shaun Ferren.  Great grandfather of Addison Hanafin, Laura & Vincent Montalto and Reilly Woods. Brother of Marie O’Connell & her husband Harry of Arlington and the late Lorraine Dynan & her late husband Robert and the late John Hanafin & his wife Diane of Wilmington.   Visiting hours will be held at the Edward V. Sullivan Funeral Home, 43 Winn St., Burlington (Exit 34 off Rt. 128/95 Woburn side) on Monday, Sept. 14.  Police and Fire may pay their respects from 4-5 p.m. and the public from 5-8 p.m.   A Mass of Christian Burial will be held at St. Margaret Church of St. Veronica Parish, 111 Winn St., Burlington on Tuesday, Sept 15 at 10.  There is a 100-person limitation at the church.  The Mass will be live streamed at 10 a.m., linked to Richard’s obituary on the Sullivan Funeral Home website.    Services will conclude with Military Honors and burial at Chestnut Hill Cemetery, Burlington.  In lieu of flowers memorials in Richard’s name may be made to St. Margaret Church, 111 Winn St., Burlington, MA 01803.