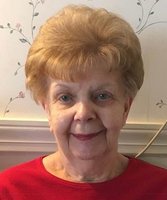 The LINK (above) will bring you to our facebook page (sign in is NOT required) to view the graveside service.  A live-stream will begin a few minutes before the start of the funeral on Friday, April 30th at 11:30 a.m.

Jacqueline Barbara (Durand) Romanowicz passed away at the Woburn Nursing Center on Tuesday morning, April 27, 2021. The beloved wife of the late Andrew Romanowicz, she was 88 years old.

Jackie was born in Bloomfield, New Jersey. She was the daughter of the late Francois and Anita Durand.  Jacqueline was raised in Fall River and was a graduate of Jesus Marie Academy, a private high school for girls in Fall River.   She was a member of the drill team in high school and was even offered an opportunity to have a career in modeling.    After high school she worked in the cafeteria of Firestone Tire Company. It was there that she would meet her future husband Andrew, who also worked at the company.  They married in 1952 and settled in Fall River where they would raise their daughter Cheryl.   Jackie and her husband Andy loved to host dinners.  She had a flair for decorating her home especially around the Christmas season.  They loved to dance the polka at the local Ukrainian functions.

Jackie had several jobs in retail throughout the years, but one of her favorite job’s was working the lunch counter at McCrory’s for over 20 years.  In later years Cheryl worked side by side with her mom at McCrory’s.

Jackie’s faith was an important part of her life.  While living in Fall River she was a member of St. Catherine’s Guild at Dominican Academy.   In recent years she had been a member of St. Charles Church in Woburn.  Jackie had many interests and hobbies.  She enjoyed spending time with her family, playing bingo, and reading novels.  One of her favorite things to do was shopping.    She loved shopping at the local mall and watching the Home Shopping Network.

Jackie spent her entire life in Fall River until 2011 when she moved to Woburn to be closer to her daughter Cheryl, son-in-law Richard and her grandchildren.  She loved her home in Woburn and made a wonderful circle of friends whom she enjoyed spending time with.  One of her greatest joys were her grandsons.  She was so proud and happy to see her grandsons start families of their own and she was blessed to see the birth of 7 great grandchildren.  Jackie had a special and unique relationship with her daughter Cheryl. They weren’t just mother and daughter, they were the best of friends.

Jackie will be remembered for her grace, her warmth, and her love and devotion to her family.

Jackie was the beloved wife of the late Andrew.  Loving mother of Cheryl Sullivan & her husband Richard of Burlington.  Proud grandmother of Edward Mikolinski & his wife Marie of Burlington, John Paul Mikolinski & his wife Karen of Burlington, Raymond Sullivan of Thornton, NH and Robert Sullivan & his wife Kera Davenport of Center Barnstead, NH.  Great grandmother of Andrew, Audrey, Sophia, Juliana, Genevieve, Raymond, and Robert.  Dear friend of Joan MacLean of Arlington.   Funeral Services will be held at the Edward V Sullivan Funeral Home, 43 Winn St., Burlington on Friday, April 30th from 11:30 a.m. – Noon.   The Funeral Service will be live streamed for relatives & friends to view on Sullivan Funeral Home website and going to Jacqueline’s obituary. A visitation will be held following the services from Noon – 1 p.m.     Burial will be private.  In lieu of flowers memorials in Jacqueline’s name may be made to Alzheimer’s Association Massachusetts Chapter, 309 Waverly Oaks Road, Waltham, MA 02452.