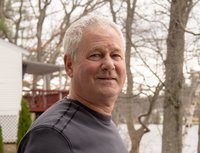 William “Bill” Joseph Mender, passed away peacefully in his sleep, on Monday, April 19, 2021 at age 63. He is survived by his beloved wife of 37 years, Gale Irene (Chamberlain) Mender, daughters Emily Elizabeth Mender - fiancé Douglas Young, Alayna Ruth Mender - husband Paul Muiznieks, and grandson Cameron William Muiznieks. In just 4 short months Cameron has filled our family with love; and his beloved Grandpa Bill will be with him in spirit and through endless stories recounted to him. Likewise, Emily and Doug will have Bill in their hearts on their wedding day, he will be missed but not gone from us.

Bill was born on August 11, 1957 in Everett, MA to the late Sheldon “Buzzy” William Mender and the late Mary “Betty” Elizbeth (Crane) Mender. Their son “Billy” was fondest of his childhood memories made in Melrose, MA, though he made friends wherever his family moved to throughout the years. In 1980 Bill met the love of his life and “best buddy”, Gale, who adored his big personality that matched their shared big dreams. They married March 31, 1984, had two children Alayna and Emily, and resided in a beautiful pondside home in Windham, NH for 37 years.

Throughout those years, Bill was coined “Mr. Fix It” by family and friends, he was never intimidated by something that needed fixing or inventing! When winter froze over Shadow Lake, you could count on Mr. Fix It to “MacGyver” a homemade Zamboni to keep the ice just shy of Olympic quality for the whole neighborhood to enjoy. You could bet that in fall he would turn simple acts of raking leaves into muddy, wild, four-wheeler adventures in the woods. Summer storms were not meant to be viewed from inside, they were an opportunity to create an epic playground out in the rain, with back flips off of the diving board of course.

Bill’s creativity, drive, and inherent talent for everything mechanical led him to study Engineering at Lowell University. While attending school he began as a Machinist for New England Nuclear in Billerica, MA. He remained at that location for nearly 30 years, through multiple promotions and company acquisitions, including Dupont, Merck, and Bristol Meyers Squibb. He went on to work as a Sr. Mechanical Engineer for QSA Global in Burlington, MA for 10 years. Just when he thought he might retire, his expertise drew him to Exogenesis in Billerica, MA where he served as Vice President of Engineering until his passing. He was so happy to have delayed his retirement and join the Exogenesis team in their ground breaking endeavors. He was admired for his resourcefulness and his thriftiness; he watched the company’s wallet as if it were his own.

Three seasons of the year Bill would spend as much of his free time as possible at his favorite place on earth, Lake Winnipesaukee. In 2001 Bill and Gale fulfilled their dream to build a camp on the “big” lake. His memory will always live on at the lake, carried in the hearts of his family and friends. He was a loving husband, father, grandfather and uncle, family first was at the core of who he was.

A Celebration of Life will be held on Saturday, July 10, 2021 on the shores of Lake Winnipesaukee: Pinckney Boathouse/Fallon Field on the campus of Brewster Academy, 80 Academy Dr, Wolfeboro, NH. The celebration begins at 10AM, a full brunch will be served starting at 11AM. Suggested attire for the event is casual.

Donations can be made to Lakes Region Conservation Trust [https://lrct.org/join-support/donate-now/]; a private non-profit organization that works to protect the surrounding beauty that Bill so treasured.