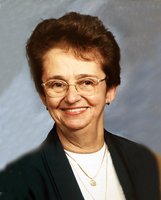 Clicking on the link (above) will bring you to our facebook page (sign-in is NOT required).  A live-stream of the funeral mass will begin shortly before 10am on Tuesday, June 15.

Lena Mary (Landry) Teas, a talented seamstress and a person of love and kindness, passed away after a short illness on Friday morning, June 11, 2021. She was 96 years old. Lena was born and raised in Pomquet, Nova Scotia. It was a small French speaking village with less than 1000 residents. Her education was in a tiny schoolhouse where she was double promoted at least once. At the age of 30, she followed her sister, Josephine, to the United States. A year later, she met her future husband a Naval Veteran, Submariner, and Cambridge Fire Fighter, Richard Teas, at a dance at the Canadian American Club in Brookline. They married in 1958 and made their home in Cambridge until 1967 when they purchased their forever home in Burlington. She was a talented seamstress. Her first job in the United States was working as furrier at Shea’s in Cambridge. When she moved to Burlington, she ran a small seamstress business called “Chez Anel” from her home. She tailored clothing, made dresses and suits, curtains, and wedding gowns. Brides would show her samples and variations of gowns they preferred with pictures and magazines, and she could create from scratch the gown of their dreams. She was so happy to make both her daughter’s their wedding dresses.

Lena was simply a kind and giving woman. She has numerous circles of friends. There were her “Cambridge Club Ladies” who met once a month to play cards and socialize for almost 50 years, her church friends, her snowbird friends, neighborhood friends, and so many others. She had a strong Catholic faith and deepened and shared it at St. Malachy’s Church. She was a regular weekend and daily mass attendee, an eucharistic minister at the church and Lahey Hospital, helped in all the church socials, fundraisers, and events, and always said “yes’ when they needed volunteers. She shared 63 years of marital bliss with her husband Richard. They worked hard raising their family, enjoyed wintering in Holiday, Florida for 20 years, and seeing their family grow and keeping their family bond strong. As a mother, she wanted her daughters to be independent and well rounded. They spent countless hours in the kitchen sharing her family recipes and traditions. As a grandmother, she would just enjoy sitting back and watching all the family dynamics, activities, and lasting memories being created. Lena had a wonderful life filled with friendships, family, and faith and her memory and spirit will live on in the hearts and minds of all she touched during her 96 years.

Lena was the loving wife of Richard G. Teas. She was the loving mother of Joan Leavitt & her husband Scott of Billerica and Pauline Teas of Clinton. She was the sister of Josephine Quimby of Concord, NH, the late Alex, Fred, John, and Arthur Landry. She was the extremely proud grandmother of Christopher & his wife Amanda Leavitt, Courtney Leavitt & her spouse Bethany Arnold, Stephanie Smith & her husband Steve, Lauren Enterkin & her fiancée Patrick Davitt, and Richard Enterkin and great grandmother of Brayden Leavitt and Isabelle Smith.

Visiting hours will be held at the Edward V. Sullivan funeral home, 43 Winn St., Burlington on Monday, June 14 from 4-7 p.m. Funeral from the Sullivan Funeral Home on Tuesday, June 15 at 9 a.m. and will conclude with a Mass of Christian Burial in St. Malachy Church in St. Veronica Parish, www.stveronicama.org, 99 Bedford St., Burlington at 10 a.m. The interment will be private. Memorials in Lena’s name may be made to St. Veronica Parish, 99 Bedford St., Burlington, MA 01803.