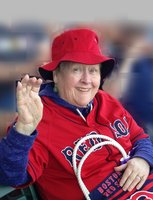 Margaret Ann (Connolly) Noble passed away at her home, with her family by her side, on Wednesday morning, June 30, 2021. The beloved wife of Frank Noble, Jr. she was 79 years old.

Peg was born in Salem. She was one of eight children born to the late Daniel and Margaret Connolly. She was raised in Lynn and a graduate of St. Mary’s High School in Lynn. At the age of 14 she would meet her future husband Frank while he was playing football with her brother. They became high school sweethearts and married in 1961. They moved to

Burlington in 1967 where they would raise their four children. Peg worked as a Senior Office Administrator at Polaroid in Waltham and Norwood for 20 years. With her organizational skills it was the perfect job for Peg. As much as she enjoyed her job, her ultimate role was that of wife and mother. She was the matriarch of the Noble family, the glue that held the family together and the one that got things done. As a family they enjoyed taking camping trips throughout New England and had one memorable camping trip to Disney. They also enjoyed visiting many of the amusement parks such as Hershey Park and Six Flags. Peg was a generous woman always thinking of others. If she was a guest at a party and was asked to bring a dessert – she wouldn’t just bring one she would bring multiple desserts. Peg was an avid Red Sox fan and enjoyed going to the games at Fenway all decked out in her “red sox gear”!