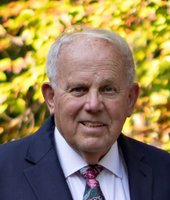 Roderick J. MacDonald, Jr. a retired general contractor passed away after a brief battle with Leukemia on Monday, July 5, 2021.  He was 80 years old.  Rod was born in Somerville, MA.  He was one of three children born to Roderick and Edith MacDonald.  His first eight years were spent in Somerville and then in 1948 his family moved to the small farming community of Burlington, MA.  He started his working career working alongside his father as a latherer doing plastering in construction projects.  It was his introduction into the construction industry.  In the late 50’s/early 60’s, Burlington started a building boom and Rod used his savings to begin his general contracting career.  He developed housing projects on Sandra Ave, Chandler Road, Drake Road, Meadowvale Road, and Upland Road.  He also delved into commercial and rental properties.  At the age of 48, he had enough with construction and moved to Moultonborough, NH where he designed and built his home on the shores of Lake Winnipesaukee.

It did not take long for Rod to morph from the hectic, stressful, and time-consuming lifestyle of a Massachusetts general contractor to the easy-going New Hampshire retiree.  He loved being at the lake, driving his personal watercraft, and seeing his family as they visited the lake.  He was an avid snowmobiler and a longtime member and volunteer of the Moultonboro Snowmobile Club.  During the off season, Rod would volunteer to help maintain the snowmobile trails removing brush, trimming trees, and repairing gates and bridges.  The club honored him a few years back for his years of volunteering.  His other passion was antique military vehicles.  He restored a Dodge Power Wagon, a military ambulance and was a member of the Military Vehicle Preservation Association “MVPA”. He participated in three major MVPA convoys.  In 2012 he drove the Alaskan Highway, in 2015 he drove the Bankhead Highway, and in 2017 he drove Route 66.  He loved the camaraderie he shared with fellow enthusiasts and the excitement of residents as the convoys with vintage military jeeps, troop carriers, motorcycles, ambulances, and other armored vehicles passed through or stopped in towns and cities across the United States.  Rod was looking forward to participating in this year’s event in July.  Rod also enjoyed traveling around the world with friends.  He was proud of his Scottish heritage and visited the Isle of Skye home of the Clan Donald in Scotland, on one of his many trips. He served as treasurer in his community association for many years.  He loved animals and over the years had 3 beagles all of whom were named “Mike the Dog.”

Rod was always "finding" treasures that he passed on to his grandkids.  Rod “inducted” his grandchildren into the "Great Poochinella Society” (a group he made up).  He often took his grandchildren for rides, visiting the local horse farm or to visit new puppies at his friends house.  Often Rod found himself at one of his daughter's houses just in time for dinner. There was never a cookie or cake that he would pass up.  Although he was always glad to see his daughters and their families at the lake, one of the first things he would say was "when are you going home".

Rod was a family man in his own quiet way.  He wasn’t a fluffy “I love you” type of guy. But rather, he was the guy who was always around with a helping hand, a funny or dry comment, and who quietly supported his children and grandchildren. He will be remembered and missed by all his family and friends.

Rod was the beloved father of Susan Boari & her husband Gregg of Burlington, MA, Sandra MacDonald of Wolfeboro, NH, Tami Carpentiere & her husband David of Meredith, NH, and the late Roderick J. “RJ” MacDonald, III. He was the brother of Donald MacDonald of RI and Edith Drolette of Burlington. Rod was the proud grandfather of Drew Coveney, Amanda, Sarah & Ryan Boari, Amanda Rothbart, Rory, Patrick, Julia, and Bridget Coughlin, Anna & Will Carpentiere. He was the former husband of Phyllis (Weaver) MacDonald of Wolfeboro, NH and Sheila (Murray) Murphy of Burlington, MA. Visiting hours will be held at the Edward V. Sullivan Funeral Home, 43 Winn St., Burlington, MA on Thursday, July 8 from 5-7 p.m.  Funeral services will be held at the Sullivan Funeral Home on Friday, July 9 at Noon and will conclude with a burial in Chestnut Hill Cemetery, Burlington.  For Rod’s New Hampshire friends, there will be an open house to speak to Rod’s family and share stories at the Suissevale Clubhouse, 17 Langdorf Street, Moultonborough, NH on Saturday July 10 from 10 a.m. – 12 p.m. Memorials in Rod’s name may be made to the Moultonboro Snowmobile Club, http://moultonborosmc.org/order-form/ , P.O. Box 118, Moultonborough, NH 03254. For obituary, online guestbook, and video tribute see www.sullivanfuneralhome.net