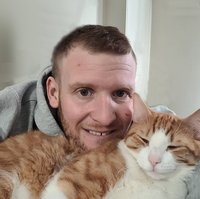 Sean Crowley, a member of IBEW Local 103, passed away suddenly on Monday, July 5, 2021.  He was 32 years old.  The son of Robin (Kelly) and Thomas Crowley, he was born in Boston and lived in Malden until the age of 8 when the family settled in Wilmington.  His childhood years were spent playing street hockey, wiffleball and many outdoor games with his friends in the neighborhood.  As an adult Sean’s passions included fresh and salt water fishing, downhill skiing, hiking playing ice hockey and “rabidly” rooting for his beloved Boston Bruins.  Sean was a 2007 graduate of Shawsheen Regional Technical High School where he learned to become an electrician.  He worked for several smaller electrical firms over the years before getting the opportunity to become a member of IBEW Local 103 where he worked as a journeyman electrician on construction projects all over Boston and the surrounding area.  Summer vacations were spent in Meredith, NH on the shores of Lake Winnipesaukee where he would fish, swim, and go boating with his family and friends. Sean, like many young adults, had his challenges in life.  With the help and support of his family and friends, he continually strived to overcome his weakness and struggles.  His family and friends will remember Sean as quiet and shy, but a big hearted and generous young man whose smile and laugh was infectious. He tried so hard to make them proud.  Sean was the beloved son of Robin (Kelly) and Thomas Crowley of Wilmington.  He was the loving brother of Caitlin Crowley & her fiancé Rick O’Halloran of Allston and Erin DiCecca & her husband Mike of Nashua, NH.  He was the grandson of Dan and Terri Crowley of Malden and Jack and Mimi Kelly of Burlington.  Nephew of Lori Heatley of NH, Mike Heatley of Concord, NH, David Kelly & his wife Amanda of Dracut and Dan Crowley of Exeter, NH.  Cousin of Matt, Kyle & Cam Heatley and Jacob, Connor & Joseph Kelly.  Visiting hours will be held at the Edward V Sullivan Funeral Home, 43 Winn St., BURLINGTON on Sunday, July 11 from 1pm – 3:30 p.m. concluding with funeral services at 3:30 p.m.  Relatives & friends respectfully invited to attend.   In lieu of flowers memorials in Sean's name may be made to MOAR, 105 Chauncy St., Sixth Floor, Boston, MA 02111  www.moar-recovery.org