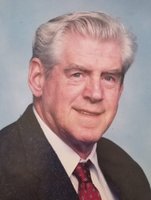 Charles W. Stubbs passed away on Tuesday morning, July 20, 2021.  The beloved husband of 52 years to Laura (Altobelli) Stubbs, Charlie was 90 years old.  Charlie was born in Barnstable   He was the son of the late Mabelle and Wilbur Stubbs.  He was raised in West Yarmouth and graduated from Barnstable High School.  He served his country in the United States Army during the Korean Conflict.   Charlie would meet his future wife Laura while attending a young adult church group in Boston.  They married in 1965 and settled in Burlington in 1969.

Charlie had a strong work ethic and worked as a Model Maker and Machinist at Polaroid in Cambridge for over 30 years.  Charlie was a loving and devoted husband and father.  Summer days were spent relaxing by the family pool at their home in Burlington.  Charlie had a passion for music, and he enjoyed playing bluegrass banjo with his neighborhood friends.  Charlie’s greatest joy were his grandchildren.  Nothing gave him greater pleasure than attending their youth sports, events, and activities.  Charlie spent a lifetime accumulating his philosophical notions and was recently encouraged to publish a collection of his poems.

Charlie was the beloved husband of Laura (Altobelli).  He was the loving father of Cheryl Mendrala & her husband Gary of West Springfield and Glen Stubbs & his wife Jill of Framingham.  Proud grandfather of Samuel, William & Luke.  Brother of the late Hope Brown, Cora Davis & Jean Stubbs.  Graveside services will be held at Pine Haven Cemetery, Bedford St., Burlington on Tuesday, July 27th at 1 p.m.  Relatives & friends respectfully invited to attend.  In lieu of flowers memorials in Charlie’s name may be made to People Helping People, PO Box 343, Burlington, MA 01803.