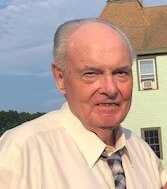 Bert L. Corrieri, a retired New England Telephone employee, passed after a long illness on Tuesday, September 7, 2021.  He was 85 years old.  Bert was born in Somerville on Derby Street.  He was the son of Ada and Samuel Scanlon.  He was a graduate of Somerville High School Class of 1954.  He then enlisted in the Air Force where he served as an Airman 2nd Class for 4 years during and following the Korean War.  He was a member of the 960th AEW & CONRON Squadron and served as an air crew member and radio operator.  He served from September of 1954 to March of 1958.  After returning from the military, he went to work at New England Telephone.  He held a wide variety of positions over the 30 plus years with New England Telephone including; telephone pole trencher, installer, lineman, and his last position as communications coordinator at Raytheon facilities.  He retired at the age of 55.

Bert and his wife Carole both grew up in the same area of Somerville.  They first met at the age of 12 at a St. Polycarp CYO event.  Their relationship blossomed when he returned from the military.  They married in 1959.  They settled in Burlington in 1969 where they raised their son and daughter.  There were always yearly family summer vacations spent on the shores of Lake Winnipesaukee and visiting his in-laws in Raymond, NH.  When he had good health, he was constantly puttering around his home, backyard, work bench, and garage.  He could fix almost anything in and around his home.  He also enjoyed working on and maintaining his and his family’s cars.  He would pick up his granddaughter's car at work, go get oil changes, stickers, and maintenance done, and have it back in her parking space before the end of the workday.  His pool was the family gathering place during the summer months and he was constantly cleaning and maintaining the chemicals, so it was always perfect for his guests to use.  He was an avid reader with Tom Clancy being his favorite author. He was a longtime Red Sox fan and could guess the answers on Jeopardy and Wheel of Fortune faster than the contestants.  Being retired at 55 gave him a strong influence in his grandchildren’s lives.  He greeted them after school, attended their sporting and school events, helped with homework, and was like a father to them.  He will be remembered for his easy going nature, strong values, dry sarcastic humor, endless array of one liners, and as a man who loved and was devoted to his wife of 62 years, children, and grandchildren.

Funeral Services will be held at the Edward V Sullivan Funeral Home, 43 Winn Burlington on Monday, Sept 13 at Noon.  Visiting hours will be held prior to the service from 10 a.m. – Noon.  Services will conclude with burial in Pine Haven Cemetery, Burlington. In lieu of flowers memorials in Bert’s name may be made to The National Kidney Foundation, 209 West Central St., Natick, MA 01760 www.kidney.org