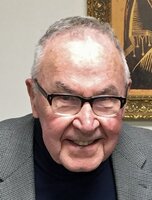 Clicking on the link (above) will bring you to our facebook page (sign-in is NOT required).  A live-stream of the funeral mass will begin shortly before Noon on Thursday, July 14.

Paul W. Carey a retired Belmont High School teacher passed away on Friday evening, July 8, 2022.  He was 94 years old.  Paul was born in New Castle, PA.  He was the son of James and Catherine Carey.   Paul grew up in New Castle and was a graduate of New Castle High School.  He furthered his education with bachelor’s degree from Clarion University and a Master ’s degree from Westminster College in New Wilmington, PA.

Paul worked for 34 years in the Belmont school system as a social studies teacher, and he dedicated his life to the education and encouragement of the spirit and enthusiasm of all students towards learning. He also worked in administration as the Chair of the Social Studies Department for grades K-12.  He was the teacher that students cherished and remembered.  He was passionate, compassionate, challenging, and kind.  He was a strong role model and a positive influence for his students.  He served as the advisor for the Class of 1963, and often attended their class reunions.  In addition to teaching, he was the assistant coach of the football and basketball teams.

Paul’s dedication was recognized with numerous awards including an Outstanding Leadership Award from Town of Belmont and induction into the Belmont High School Athletic Hall of Fame.

After Paul retired from the Belmont Public School System, he worked for both Harvard and Brandeis Universities, mentoring student teachers.  He helped many teachers achieve their dreams with his calm and compassionate style.  He was a member of Massachusetts Teachers Association, National Educators Association, Massachusetts Council for the Social Studies and the National Council for the Social Studies.  Nothing made him happier than seeing former students, hearing about their success, and knowing he contributed to their achievements.

Paul’s children teased him that he was “the mayor.”  He always knew what was going on in the neighborhood (whatever neighborhood that was) and was ready to lend a helping hand.  Paul genuinely cared for others and would go out of his way to be helpful, make others feel included and appreciated.  He would take the time to wash a neighbor’s car, delivery their newspaper, stopping and making time for conversation, or simply asking how others were doing.  Paul never hesitated to be thoughtful and kind to others.

Paul could discuss any subject, sports, politics, history, world events.  Paul and his wife Dorothy enjoyed 17 winters in New Smyrna Beach, Florida.  They enjoyed the friends and the sun during their times in Florida.  Paul was devoted to his wife, Dorothy, in such an extraordinary way. Paul became her full-time care giver in her final years and even when she went into an assisted living facility, he was there every day supporting her.

Paul was a devoted father to his three daughters whom he adored.  He encouraged each of them to follow their passions, value education, respect diversity, and the importance of family.  Paul supported them through setbacks and celebrated all their achievements, both big and small.

Paul was a loving “Papa” to his four grandchildren.  He found time to attend their school and sporting events and activities. He was so proud to be part of their young lives and more recently as adults.  Paul was blessed to be“Great Papa” to three great grandchildren.

Paul had the gift of influencing thousands of young minds throughout his career.  His impact will be generational.