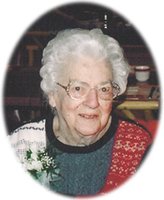 Loretta M. “Auntie Laurie” Matterazzo of Burlington formerly of Winthrop passed away at her home in Burlington on her 93rd birthday. She had devoted her life to helping our youth. Mrs. Matterazzo grew up in East Boston. She was a graduate of Boston Teacher’s College in 1932 at the age of 19. She would later earn her Masters Degree in Education from Northeastern University. She originally started teaching at the Quincy School in Chinatown. She taught for many years in Bedford. She retired as the Vice Principal of the Center School in Bedford in 1963. Even in her retirement years she continued to help children in need. She taught Special Needs Children in Naples Florida. She tutored remedial reading for the Charlestown Boys Club. She also taught religious education at the St. John’s Evangelist School in Winthrop. She was proud to have been a positive influence on children. Over her 93 years, Mrs. Matterazzo had resided in Medford, Bedford, Bonita Springs, FL, Winthrop, and finally in Burlington. She was a member of the American Legion Auxiliary, Post 251. She enjoyed spending time at the Burlington Council on Aging and participating in their many activities and events. Mrs. Matterazzo is the Beloved wife of the late Armand “Mando” Matterazzo. She is the devoted daughter of the late John and Mary A. Wellings. She is the loving sister of Marion F. “Honey” Collins of Medford and the late Agnes “Cutie” Mortellite and Phyllis DeFronzo. She is the cherished aunt of Loretta Meucci of Medford, William “Jack” Collins of Billerica, John Mortellite of Florida, Phyllis Martinello of Burlington, Lawrence Collins, John Collins both of East Boston, and Tom Collins of Winthrop. She is also survived by several grand nieces, grand nephews, great grand nieces & great grand nephews. Funeral from the Edward V. Sullivan Funeral Home, 43 Winn St., BURLNGTON (Exit 34 off Rt. 128, Woburn side) on Saturday, Feb. 25 at 9 a.m. Followed by a Mass of Christian Burial in St. Margaret’s Church, 111 Winn St., Burlington at 10 a.m. Visiting hours Friday 4-8 p.m. Interment in Holy Cross Cemetery, Malden. Memorials in Laurie’s name may be made to VNA Middlesex East & Visiting Nurse Hospice, 607 North Ave., Suite 17, Wakefield, MA 01880 or the Burlington Council On Aging, 61 Center St., Burlington, MA 01803. For directions & obituary see www.sullivanfuneralhome.net & www.saintmargaretschurch.net