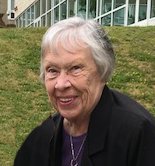 Obituary of Patricia A Fonseca

Patricia A. (Burris) Fonseca, a woman devoted to her family, passed away at the Lahey Hospital & Medical Center on Sunday evening, March 24, 2019.  The beloved wife of the late Robert Fonseca, she was 80 years old.

Pat was born in Somerville. She was the daughter of the late Gilbert and Dorothy Burris.  Pat was raised in a wonderful neighborhood in Somerville filled with families and friends who knew each other well. It was there that she would meet her future husband Bob, who was her neighbor as well as classmate. Pat’s family moved to the rural community of Bedford when she was in high school.  Since there was no high school in Bedford, she would graduate from Concord/Carlisle High School class of 1956 with about 30 students in her graduating class. Pat and Bob would marry in 1958 and move to Burlington in 1964 where they would raise their children.

In addition to providing a home for her husband and children, Pat worked in the office at Almy’s Department store for ten years. She then went to work as a Teller for the Commercial Savings Bank’s Burlington branch. She loved her jobs and the daily interaction she had with the residents of Burlington. Along with raising a family and working, Pat helped care for her mother-in-law, Isabel Fonseca, for five years. Pat always put the needs of her family above everything else; that was just the type of person she was.

Pat, Bob and their children had a second home on Round Pond in East Wakefield, NH. It was a special place for the entire Burris/Fonseca family where they created, and continue to create, very special memories as a family.

Pat had a great love for children and a wonderful way with them.  She was like a “Pied Piper” with a knack for understanding children and making them feel comfortable.  Pat was a hands-on grandmother, helping her family with childcare, playing endless games of ConnectFour, building sandcastles at the beach, attending recitals and making the best pasta sauce her grandchildren will ever know. Nothing brought her greater joy than spending time with them. Her grandchildren were her pride and joy.

Pat was widowed at the young age of 57.  She eventually sold her home on Thomas St. and moved to Grandview Commons, where she knew many of her neighbors from years of working at the bank and Almy’s.  Pat and her friends enjoyed taking cruises together, cards on Wednesdays and a memorable trip to Alaska.

Pat will be remembered as a loving, kind and selfless woman who treasured her family. Pat was the beloved wife of the late Robert. She was the loving mother of Robert & his wife Diane of Billerica, Linda Myles & her husband Lee of LA and Stephen & his wife Tammy of Bradford. Proud Nana of Jeffrey Fonseca & his companion Jaimie Crotty, Jessica & Melissa Fonseca, Jason, Jenna, Jordan & Jadyn Myles and Ella Fonseca.  Great grandmother of Hunter Fonseca.   Sister of the late Eugene Burris.  A visitation will be held at the Edward V Sullivan Funeral Home, 43 Winn St., BURLINGTON (Exit 34 off Rt. 128/95 Woburn side) on Wednesday, March 27 from 4-8 p.m.  Relatives & friends respectfully invited to attend.  Funeral Services and Burial will be private.  In lieu of flowers memorials in Pat’s name may be made to St. Jude’s Children’s Research Hospital, 501 St. Jude Place, Memphis, TN 38105 www.stjude.org