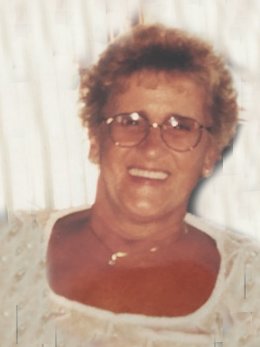 Jeanne M. (LeBlanc-Chesbrough) McEvoy, a wife, mother, grandmother, and great grandmother passed away after a long illness at the Royal Meadow Center in North Reading on Tuesday, July 16, 2019.  She was 86 years old. Jeanne was born in Alston.  She was one of two daughters born to William and Catherine LeBlanc.  Jeanne grew up in Burlington and was a 1951 graduate of Burlington High School.  She married Theodore “Ted” Chesbrough and had six children.  They made their home in Woburn and Stoneham.  Ted sadly passed away in 1989 at the age of 57.  Many years later, Jeanne was blessed to meet and  marry another wonderful man, Arthur McEvoy.

Jeanne’s first and most important job was that of a mother to her six children.  To help with the household finances, she had worked as a lunch lady at the Tarky School and Woburn High School for many years.  She worked for 20 years as a salesperson at Colony Corporation which was a designer window treatments retailer and installer.  She ended her working career as an administrative assistant for Joseph McComiskey of JPT Architecture in Billerica.

Jeanne had a vibrant and outgoing personality.  She was a member of the Ladies Auxiliary of the American Legion in Melrose.  She loved square dancing.  She enjoyed going to Bingo with her family and girlfriends.  She always kept busy doing arts and crafts and crocheting.  She took countless vacations with her family and especially enjoyed the summer camping trips and vacations spent on the shores of Lake Winnipesaukee.  She enriched the life’s of all her family and friends with her sincerity, warmth, and lively personality.

A visitation will be held at the Edward V. Sullivan Funeral Home, 43 Winn St., Burlington (exit 34 off Rt. 128/95, Woburn side) on Friday, July 19 from 8:30-9:30 a.m. Followed by a Mass of Christian Burial in St. Margaret’s Church, 111 Winn St., Burlington at 10 a.m. Services will conclude with a burial in Chestnut Hill Cemetery, Burlington. For directions obituary & online guestbook see www.stmargaretburlington.org or www.sullivanfuneralhome.net

Share Your Memory of
Jeanne
Upload Your Memory View All Memories
Be the first to upload a memory!