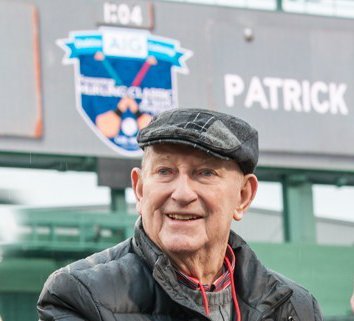 Patrick Austin Hoarty, retired owner of Pat Hoarty & Sons Landscaping and Irish Hurler, passed away peacefully at his home with his family at his bedside on Friday morning, July 26, 2019.  He was 95 years old. Pat “Paddy” was born in Adrahan, County Galway, Ireland. He was one of seven children born to Patrick and Anne Hoarty. He grew up in Galway, Ireland and as soon he could walk, he was playing the sport of Hurling.  He was an outstanding hurler in Ireland as well as the United States. Paddy played Hurling for Galway and was a member of the successful Senior Championship team in 1949 that won in Croke Park in Dublin Ireland. He immigrated to the United States in 1949.  He quickly found fellow Hurlers in the Boston area and was the pick of Boston to play with the New York Team in 1951 in Croke Park, Dublin, Ireland.  He played for years with the New York Teams.  He played the first Hurling game in Fenway Park in 1954 and was honored in November 2015 when the team returned to Fenway Park.  A copy of the 2015 Boston Globe article about Pat is included at the end of the obituary.

Pat was a special man.  He was an athlete, business owner, and a family man and he did all this in his own special Pat “Paddy” Hoarty style.  Hurling was his passion, but that didn’t put food on the table. Pat worked for Boston Gas for a number of years and then started his own company, Pat Hoarty & Sons Landscaping. His landscape clients were in the communities of Brighton, Newton, Watertown, and surrounding communities.  He was a man that wasn’t afraid of hard work and took pride in everything he did. He also was co-owner with his wife, Maura, of the Galway Bay Restaurant in Watertown for many years. Maura, was the real force behind the restaurant with Pat helping with any way she needed him. They purchased their Marshfield home 35 years ago as a summer vacation home and when they retired 22 years ago, they made it their full time home.  The home had 1 ½ acres which kept Pat constantly busy manicuring the grass, tending to flower beds, and trimming the shrubbery and trees.

Pat, with his Irish brogue,  had a quick wit always kept everyone on their toes.  There was never a simple yes or no answer to a question, rather a satirical comment, a short tale, silly pun, or any other entertaining response or gesture.  He was a wonderful role model for his children and grandchildren. He came to the United States with nothing and through good old fashion hard work started 2 businesses, had a roof over his family’s head, and gave his children opportunities like a college education which was not available to him growing up in Ireland.  He was so excited to be an indulging grandfather to his 11 grandchildren. He was truly a memorable man.

Pat was the beloved husband of Maura (Kierce) Hoarty with whom he shared 63 wonderful years.  He was the loving father of Thomas Hoarty & his wife Kristine of Burlington, Brendan P. Hoarty of Watertown, Marie Worthen & her husband Bruce of Manchester, NH, Pauline Schipelliti & her husband Bernard of Winchester and Patrick Austin Hoarty, III of Brighton.  He was the proud and loving Poppa to Deirdre & Kate Worthen; Daniel Hoarty & his wife Michelle, Kelly, Bridget & Patrick Hoarty; Matthew, Kathleen, Elizabeth & Christina Schipelliti and the late Ryan Worthen.   He was the son of the late Patrick & Anne (Quinn) Hoarty and the brother of the late Thomas & John Hoarty, Mollie Howley, Annie Tully, Bridie Creahan & Peggy O’Brien. Pat was also survived by many nieces and nephews.

In 2015, the Boston Globe staff writer, Jim Davis, interviewed Pat after he flipped the coin for the Galway vs Dublin Hurling Match in Fenway Park. Here are excerpts of that Globe article using Pat’s own words;

The last time they played hurling at Fenway Park, in 1954, Pat Hoarty was standing in the outfield, looking up at the Green Monster.

On Sunday, when Ireland's national game came back to Fenway after a 61-year absence, Pat Hoarty was back in the outfield.

At 91, he's the last man standing from that game 61 years ago, when a group of American players took on a Cork team led by a hurling legend, Christy Ring.

Hoarty drew the unenviable task of covering Ring that day, and truth be told he wasn't in awe.

"He was a good player, one of the best," Hoarty allowed, "but there were a lot of good players."

Hurling has been compared to lacrosse and field hockey, but it's its own game. Players use sticks called hurleys to belt the ball down the field, toward the opponent's goal.

Hoarty grew up in Ardrahan, a village in Galway where they hand babies hurleys instead of rattles.

"I was hurling by the time I could walk," he said.

But work was hard to come by, and he set off for America in 1949. He worked for the gas company and went to dances at the Intercolonial in Roxbury and kept hurling. It's a rough game, played at a ferocious speed with ferociousness.

When the Gaelic Athletic Association brought over a team to showcase Ireland's national game at Fenway in 1954, Hoarty was enlisted to play for the American side.

On the sidelines at Fenway that day was a young wisp from Clare. She was called Maura Kierce, and she was 18 and worked as a nanny for a family in Cambridge. She had her eye on Pat Hoarty from the moment she spied him across the dance floor at the Intercolonial in Dudley Square.

It took her two years to land him.

"She told me she had money," Pat Hoarty said. "She lied."

They got married 59 years ago, and Pat had to hang up his hurley because the truth is, with kids at home, he couldn't risk injury. Back then, if you didn't work you didn't eat. They raised five kids in Brighton.

"I never regretted the decision," he said. "I loved the game. I loved my family more."

On Sunday, when Pat Hoarty walked back onto the outfield grass transformed into a hurling pitch for the first time in 61 years, Maura and their kids and nine of their ten grandkids were with him. He shook hands with the captains of the Galway and Dublin teams, then settled in with his family to watch a hybrid of the game, made necessary by Fenway's confines.

On Sunday, more than 27,000 were there. Galway won in a match that featured an incredible display of skill, stunning goaltending, and even a fight.

"More a scrap than a fight," Pat Hoarty suggested.

The most remarkable thing, probably lost on many of the Americans who made up the bulk of the audience, is that all those remarkably conditioned and talented athletes are amateurs.

"I never made a dime hurling," Pat Hoarty said. "Neither do these boys. Incredible, when you think about it, with the money they make in sports today."

Pat left the gas company and worked most of his life as a landscaper. Like the sport he once lived for, his life choices were never about money.

On Monday, 24 hours after he was back in the limelight at Fenway after a 61-year hiatus, Pat Hoarty was sitting at a table in his Marshfield house, sharing tea and some soda bread with Maura. For a guy who played a game for nothing, and didn't marry for money, he looked pretty rich to me.

Share Your Memory of
Patrick
Upload Your Memory View All Memories
Be the first to upload a memory!