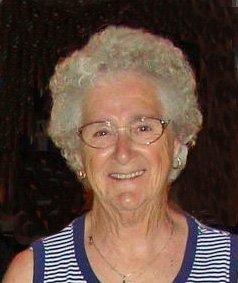 Catherine T. (Ewing) Russell, a woman devoted to her family, passed away unexpectedly on Monday evening, October 21, 2019, she was 88 years old.

Kate was born in Boston. She was one of eight children born to the late Henry and Margaret Ewing. She was raised in Dorchester and was a graduate of Monsignor Ryan Memorial High School in Dorchester. In the early 30’s, Burlington was a vacation spot that many people from the city frequented.    As a child, Kate’s parents had a summer camp in Burlington and Kate would spend much of her summers there.   She would literally meet the “boy next door,” Everett Russell, whose family lived just a few doors down from Kate’s parents.  They would marry in 1954 and live in Woburn for a few years.  In 1958 Kate and Everett would purchase their family’s vacation home in Burlington and make it their own.

After her husband passed away in 1984, she went back to work. She worked as a supervisor in Utica Mutual Insurance Co. in Wakefield for 11 years.   Kate led a full and active life.  She enjoyed bowling and was a member of several leagues throughout the years.  She loved reading and doing cross word puzzles.  Kate was a devoted Red Sox fan, supporting them even during the years that they struggled.   She enjoyed taking trips with her family to Disney and Las Vegas.

Kate’s greatest joy was her home and her family.  She loved her home in Burlington, and being the outgoing person that she was,  enjoyed her interaction with her neighbors.   She was a loving and supportive mother, and had a close relationship with her children Paul and Cathy.   Kate was very involved in her grandchildren and great grandchildren’s lives.  She always made time for them and made each of them feel special in their own way.

Kate was the beloved wife of the late Everett S. Russell.  She was the loving mother of Paul Russell & his wife June of Alton, NH and Cathryn “Cathy” Tranchita of Burlington. Sister of the late Mary Westholm, Margaret Russell, Marion Cataldo, Francis, Harry, Robert, and Arthur Ewing. Proud grandmother of Alicia Foss & her husband Russell, Michael Tranchita, Steven Tranchita & his wife Caitlin, and Paul Russell, Jr. Great grandmother of Maddison, J.R., Kendall, Annabella, Cain, Travis, and Trevor. Catherine had many loving nieces and nephews.  A visitation will held at the Edward V. Sullivan Funeral Home, 43 Winn St., Burlington (exit 34 off Rt. 128/95, Woburn side) on Thursday, Oct. 24 from 4-7 p.m. Funeral from the Sullivan Funeral Home on Friday, Oct. 25 at 9 a.m. Followed by a Mass of Christian Burial in St. Malachy Church, 99 Bedford St., Burlington at 10 a.m. Services will conclude with a burial in Chestnut Hill Cemetery, Burlington. Memorials in Catherine’s name may be made to the American Heart Association, 300 5th Ave., Waltham, MA 02451  www.heart.org

Share Your Memory of
Catherine
Upload Your Memory View All Memories
Be the first to upload a memory!