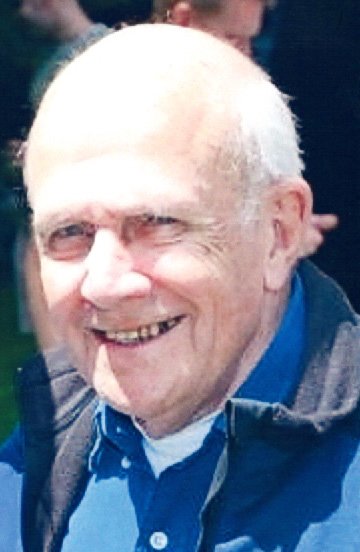 Obituary of Thomas A. Shanahan

Thomas A. Shanahan passed away at the Sawtelle Family Hospice House on Sunday evening, November 10, 2019. The beloved husband of the late Louise Joan (Kerrigan) and Theresa Mary (Walsh), he was 92 years old.

Tom was born and raised in Somerville.  He was the son of the late William J. and Mary T. Shanahan.  Tom attended St. Theresa’s grammar School, which was a part of St. Catherine’s Parish in Somerville.   He went on to graduate from Boston College High School in 1945.  After high school, Tom served his country in the United States Navy during World War II, where he was assigned to the Naval Air Transport Service, Squadron Three.  He was a recipient of the World War II Victory Medal.       After leaving the Navy Tom, while working, went to college graduating from Boston College in 1953. He was very proud to be a “Golden Double Eagle”.

Tom was married to his first wife Theresa Mary (Walsh) in September of 1950. Their beautiful daughter Kathleen was born in 1958.  Theresa passed away at the young age of 41.  He had many fond memories and stories that he would share from the times he spent with the Walsh family.

Tom had a long and successful career in corporate real estate and facilities.  His activities were focused domestically as well as in Britain, France, Germany and Japan. Much of his career he worked for Sanders Associates and Computervision Corp.

It was while working at Sanders Associates that he would meet Louise Joan (Kerrigan). They married in 1972 and welcomed the birth of their son Daniel in 1975. He was quickly proclaimed and forever will be “Uncle Tom” to the clan.

Tom was a devout catholic.  He was a longtime member of both St. Margaret’s and St. Malachy’s.   His faith was an important part of his life and he was a lecturer at both parishes for over 40 years.  Tom was a Charter member, Past Grand Knightand Former District Deputy, Burlington Council Knights of Columbus.  He was a member of Father John J. Crispo Assembly 4th Degree.   Tom was a very active member of the K of C.  He was involved locally in Burlington as well as statewide.  Together with the Master of the Simonds Lodge, Tom organized the first joint meeting of the Masons and the Knights of Columbus in 1964.

Tom had many interests and hobbies.  He loved playing the piano at family functions.  He enjoyed horseback riding at ranches in upstate New York, Montana and Arizona.  Tom was proud of his Irish heritage and had taken several visits to County Limerick and County Cork, including those special voyages with his nephew Bill.  In his mid-eighty’s Tom started to take flying lessons again, something he started earlier in life. He had hundreds of flights logged into his late 80s and even tipped his wings over Pawtuckaway.

Tom lived for his family.  He was extremely close with his brothers and sisters. He loved spending time with all his nieces and nephews, watching their families grow and grow.  He was incredibly proud of his son Dan.  He and Louise followed Dan’s baseball experiences from Little League through Westfield State College.  They hardly ever missed a game over all those years.  Tom was delighted when Dan married his wife Lynn and they later moved to Burlington.  His greatest joy came with the birth of his two grandchildren – twins - Caitlin and Conor in 2007.   He was a “proud Papa” and they were his everything.

Tom was the type of person that always wanted to hear about you and what was happening in your life. He had a unique ability to make everyone he touched feel “special”.

Tom was the beloved husband of the late Louise Joan (Kerrigan) and Theresa Mary (Walsh).  He was the loving father of Kathleen of Dracut and Daniel & his wife Lynn of Burlington. Proud grandfather of Caitlin & Conor.  Brother of the late Rev. William J. OMI, Sr. Eleanor M.OP, PFC Paul F. USA, Joanne M. Hawkes and Mary T. Tilley. Tom is also survived by many nieces, nephews, great nieces and great nephews.      Visiting hours will be held at the Edward V Sullivan Funeral Home, 43 Winn St., BURLINGTON (Exit 34 of Rt. 128/95 Woburn side) on Wednesday, Nov. 13 from 4-8 p.m.  Funeral from the Funeral Home on Thursday, Nov. 14 at 9 a.m.  Followed by a Mass of Christian Burial in St. Malachy Church, 99 Bedford St., Burlington at 10 a.m.  Burial to follow in Chestnut Hill Cemetery.  In lieu of flowers memorials in Tom’s name may be made to Knights of Columbus Exceptional Children’s Fund, PO Box 25, Burlington, MA 01803.    For directions, obituary & online guestbook see www.sullivanfuneralhome.net & www. saint-malachy.org

The youngest of six, he lost his dad when he was only 2, this catalyzed his relationships with his mother, brothers and sisters.  One of his favorite stories was how he and May as the youngest children seemed to always be getting dressed up and going over an Aunt or Uncles house for a party.  Eventually they realized that most of the parties were due to a family member passing.

His Brother Paul was his idol at an early age, taking him on charcoal deliveries and even letting him drive the truck at times.

They lost their mother when Tom was only 15.

Throughout their lives he maintained close relationships with Joanne and Jim as well as May and John.

As the youngest cousin by over 15 years, I couldn’t understand why my cousins from the North were always referred to as the “kids” from NH and those from the South were the “kids” from Green Harbor.    Later in life I realized that that it was my Dad’s way of proudly referred to the entire clan.  Not just referring to my cousins, whom he loved so dearly, but also their kids and then their kids.   He deeply enjoyed watching the family grow with all their many personalities and accomplishments.

It was later in life that he grew very close to his older sister L and brother Bill.

He will forever be known as “Uncle Tom” by so many.

Bear with me as this first one is tough to articulate. He was genuinely happy to have the time and connection he had with each person, in that moment, whether family or friend.  He had a deep understanding that life brings people together and sometimes in separate ways when life just happens and people get busy. We never heard him complain about losing touch with someone or complained that someone did not keep in touch. Next time he saw you, even if several years had passed, you started where you left off, like it was yesterday.  There was never an ounce of resentment, just happiness of the opportunity that your paths crossed again.

Examples of his strong friendships include those he worked with, fellow Knights of Columbus, and those that he connected with at daily mass.

Secondly, as we all know life has its ups and downs, it challenges and accomplishments.  Tom certainly had his share of both.  There were times when life gave him a brush back pitch or even knocked him down to the ground.  He lost far too many loved ones, far too early.  Most notably his wife Theresa after only 20 years of marriage, when Kathy was only 12 years old.  He was able to pick himself back up and later married Louise to only lose her after 30 short years.  He would say that he was happily married for 50 years, just not consecutively.  He loved them and their families both deeply and individually.   He had a heart attack that almost caused him to miss his son’s first birthday as well as other serious medical conditions over the years.  However, he never gave up. . .  It is no secret or doubt that it was his faith in God and the love and support of his family and friends that helped him get back up each time.

Lastly, life is way too short!  That is how he lived.  This is why he started taking flying lessons again, with hundreds of flights into his late 80s.  It allowed him to have a special loving friendship with Rosemary and be an important part of his grandchildren lives.  Enjoy life and live it to the fullest.

At the end, his mind was a prisoner of his failing lungs and body.  Otherwise he would still be flying, driving to daily mass and making positive memories for himself and those he encountered.