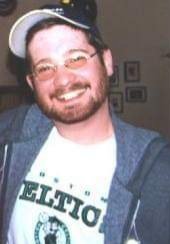 Scott Michael Queen, a lifelong resident of Burlington, passed away unexpectedly on Tuesday, November 12, 2019.  He was just 37 years old.  Scott was born in Winchester.  He was a member of Burlington High School’s Class of 2001.  He had worked at Stop & Shop in the produce department and then at Millipore in Burlington as a facilities manager.  Scott was a quiet young man with an old soul.  As a child and adult, he had a great admiration for his dad.  When he was a boy, he pretended as if he were driving his trucks and excavation equipment.  As an adult, he cherished the time spent with his dad whether it was camping in his mobile home across New Hampshire, visiting his camp at Lake Winnisquam, boating, fishing, working around the yard, or simply watching a game together.  Scott wasn’t much of a conversationalist, but he kept in touch with family and friends by texting.  He loved watching scary movies and was a huge fan of Johnny Cash.    Many did not know, but Scott had a creative and inquisitive side to him.  He enjoyed puzzles, building model trucks, sketching, and coming up with creative solutions and fixes to problems.  His unexpected passing is difficult to admit, but his family a thankful that Scott is now reunited with his best friend, his “Dad”.

Scott was the beloved son of the late Michael James Queen and JoAnn (Bureau) Queen.  He was the loving brother of Angela “Angie” Pollard & her husband Ernie of Tyngsborough and Jay Milinazzo & his wife Renee’ of Lowell.   He was the dear nephew of Bernadette Gilet & the late Richard of Chelmsford and Denise Milinazzo & the late Robert of Lowell.    He was the uncle of Cassidy & Vincent Pollard and Alyssa, Shannon & Aiden Milinazzo.  Cousin of Patrice Gilet, Zachary & Travis Ricardo and the late Michelle Gilet.  Visiting hours will be held at the Edward V Sullivan Funeral Home, 43 Winn St., Burlington (Exit 34 off Rt. 128/95 Woburn side) on Tuesday, Nov. 19 from 5-8 p.m.   Funeral from the Sullivan Funeral Home on Wednesday, Nov. 20 at 9 a.m. Followed by Mass of Christian Burial St. Charles Church, 280 Main St., Woburn at 10 a.m. Services will conclude with a burial in Chestnut Hill Cemetery, Burlington.  For directions obituary & online guestbook see www.sccwoburn.com or www.sullivanfuneralhome.net

Share Your Memory of
Scott
Upload Your Memory View All Memories
Be the first to upload a memory!