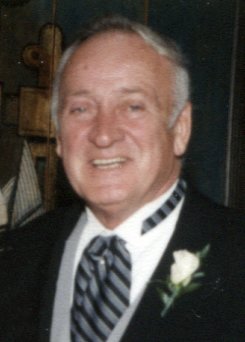 James J. Rogers passed away at the Prescott House in North Andover, on Tuesday morning, December 3, 2019.  The beloved husband of Jill (Graham) he was 89 years old.

Jim was born in Boston. He was the son of the late Theodore and Catherine Rogers.  His family moved to Burlington when he was in the 4th grade.  Jim was a 1948 graduate of Burlington High School.  He would meet his future wife Jill while attending school in Burlington. They married in 1954.    Jim was a veteran of the Korean War serving his country in the United States Army from 1951 to 1953.  He was the recipient of the Korean Service Medal with 2/Stars, the Combat Infantry Badge and the United Nations Service Medal.    After the service he worked in the HVAC industry as a Steam Fitter for many years.  He ended his career working as a Facilities Manager for Lahey Hospital & Medical Center in Burlington.

Jim and his wife Jill purchased their home on Locust Street in Burlington.  It was a wonderful neighborhood to raise their six children.  Jim loved to cook and was known for his famous breakfast omelets that he would make for his children and everyone in the neighborhood was welcome to enjoy as well.    He was a handy man and loved to work around the house and do home improvements.

Jim was known for his outgoing personality and always having a smile on his face.   He was a doting and a fun dad to his six children.  He instilled in them the importance of a close family. He was famous for saying to his children “no fighting amongst yourselves because family is everything”.   When the children were young the family enjoyed vacationing in Winnisquam in the lakes region of New Hampshire.   In later years Jim and Jill enjoyed traveling with his sister Margaret and her husband Ray taking trips to destinations such as Germany and California.  Jim and Jill had a wonderful 65 year marriage and where wonderful role models for their children, grandchildren and great grandchildren.  He will be remembered as a happy and outgoing man who had a great love for his family and the community he lived in.

Jim was the beloved husband of Jill (Graham).  Loving father of Kevin & his wife Nancy of Burlington, Donna Ambrose & her husband John of Londonderry, NH, Kim Noonan & her husband Rob of Burlington, Terri Modesto & her husband James of Goffstown, NH, Kathy Ganshirt & her husband Karl of Norfolk and Sandy Rogers & her husband Paul Hoffman of Tewksbury.  Proud grandfather of 19 and great grandfather of 10.  Brother of Kathleen Govoni of Burlington, Donald Rogers of NC and the late Margaret McLaren and Ginger LaVoie.  Visiting hours will be held at the Edward V Sullivan Funeral Home, 43 Winn St., BURLINGTON (Exit 34 off Rt. 128 Woburn side) on Thursday, Dec. 5 from 4-8 p.m.  Funeral from the Funeral Home on Friday, Dec. 6 at 9 a.m. Followed by a Mass of Christian Burial in St. Margaret’s Church, 111 Winn St., Burlington at 10 a.m.  Burial to follow in Chestnut Hill Cemetery, Burlington.  In lieu of flowers memorials in Jim’s name may be made to the Prescott House, Activity Fund, 140 Prescott St., North Andover, MA 01845