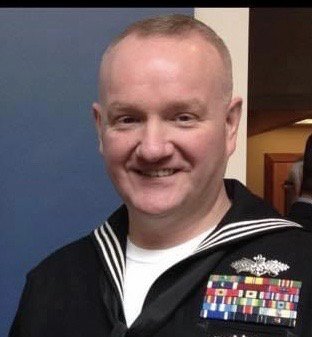 David Joseph, Almond, Jr., Petty Officer 1st Class, US Navy, passed away suddenly in Virginia while on active duty on Monday April 13, 2020.  He was only 51 years old.  David was born in Cambridge.  He grew up in Belmont and Waltham.  He was a 1986 graduate of Waltham High School.  He knew at a very early age, that he wanted to join the Navy.  He served his country for over 22 years in a wide variety of roles.  His first duty station was as a culinary specialist on the Los Angeles-class submarine USS Augusta (SSN-710).  It was hard to understand why David, a large strapping individual, would choose the cramped quarters of a submarine, but David loved it.  After transitioning to the Navy Reserves, David was assigned to the Seabees, Naval Construction Battalion 27.  In 2005, he was recalled to active duty, serving with the Seabees in Iraq, working as a builder and fighting his way to Baghdad where David earned the Navy’s Combat Action Ribbon among his numerous other personal and unit achievement awards. While in Iraq, SEAL Team 7 were made aware of his culinary talents and he was crossed assigned to the SEAL Team to provide Logistical support during the remainder of his deployment. Shortly after returning from deployment, he volunteered to become a member of the Naval Funeral Honor Guard.  He always considered it a privilege to honor Veterans of WW II, Korea, Vietnam, Cold War, Gulf War, and War in Afghanistan.  Over the years he performed more than 3,000 funeral honors missions for U.S. Navy Veterans and veterans of all services, honoring them for their service to our country as they were laid to rest.  His commitment to the Funeral Honors Team included many sacrifices and missed many important events in his family’s lives, but few were more dedicated to the Navy and to rendering dignified honors to those who served. David epitomized the Navy motto of “Honor, Courage and Commitment”. He believed very deeply in the value of U.S. Navy tradition and would sometimes lament “what happened to my Navy?!” when observing some nuance that just didn’t fit the Navy ethos.

When not in uniform, David worked at a variety of supervisory roles in the restaurant business in and around the Boston area including many top-rated restaurants like Jerry Remy’s and Temazcal. David also had a softer side to him when not on Navy duty.  His trademark, shorts, no matter the weather and ever-present sense of humor.  He had a sharp, sarcastic, and dry wit that sometimes would take his friends time to catch on to his humor.  He loved cars.  Over the years, he had trucks, Jeeps, Cadillacs, Lincolns, and his infamous orange MG which many wondered how he could get in and out of.  He also had quite a collection of Matchbox cars.  He had a large collection of Zippo lighters that filled a wall in his home.  He loved Classic Rock.  But most importantly, David’s life revolved around his daughter, Jaime.  When at home, he was deeply involved in her life, activities, and interests.  While on Navy duty, they were in constant contact with each other via text message, shared emails, or through Facetime.  They traveled across the country to ride the coolest and scariest rollercoasters.  It was their “thing” that they shared.  David was a man of honor, kindness, empathy, and love.

When not spending quality time with Jaime, David was in his comfort zone sharing a good whiskey and a quality cigar at a variety of cigar bars, restaurants, and holding court at the infamous “Carey Fire Pit Summits” at his shipmate Brian Carey’s home. He was truly in his element spending time with his shipmates, swapping sea stories, and had a knack for engaging all in captive style while relating some of his experiences with a sense of humor that only he could portray. He had an uncanny talent for lightening the mood of virtually any situation. David epitomized the true quality of what it meant to be a Navy “shipmate”. He was generous, kind, a good mentor to junior sailors, and would drop everything to help family or a friend in need.