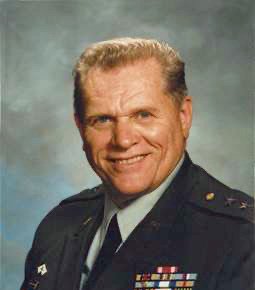 Arthur W. Thompson, Jr. passed away at the Aberjona Nursing Home in Winchester, following a long illness, the beloved husband of Joan (Harrold) he was 91 years old.

Arthur was born in Boston on June 23, 1928, the eldest child of the late Arthur and Margaret Thompson. He was raised in Charlestown and graduated Medford High School in 1945.  He received a bachelor’s degree in Mechanical Engineering and a master’s degree in Business Administration from Northeastern University.  Arthur had a long and distinguished career that spanned 28-years as an Engineer, Manager and Director with New England Telephone, AT&T and Western Electric. He retired from the MITRE Corporation in Bedford and was a member of the National Society of Professional Engineers.

Arthur served with the Massachusetts National Guard and United States Army Reserves from 1948 until June 1988 and achieved the rank of Colonel.  He also served with the Massachusetts State Guard from 1988 to 1995 with the rank of Major General. Arthur was proud of his service to his country and community. He was an active member of The Ancient and Honorable Artillery Company of Massachusetts for over two decades and was involved in many of their civic and charitable activities.

Arthur met his wife Joan through his sister Gloria. They married on October 13, 1956 in Winchester and settle in Burlington. Arthur was the consummate family man dedicated to his wife and children.  He coached their athletic teams, rarely missed any of their sporting events, and was actively involved in their education watching them grow into adulthood with great pride. He traveled the world for business and continued that passion in retirement traveling with his wife Joan and the Ancients to Europe, Africa, Asia and Australia.  Arthur and Joan had a wonderful marriage and were always there for each other and their family.  When the children got older and the grandchildren arrived, Arthur took the entire family on an annual vacation to the Balsams Grand Resort Hotel in Dixville Notch New Hampshire. An old-world resort where gentleman and ladies dressed for dinner, and special memories were created.

Arthur was a very generous man who was always willing to help a stranger.  He worked for H & R Block seasonally and would often do the taxes of a struggling college student or an elderly person on a fixed income free of charge. He loved his grandchildren and took great pride in all their achievements and was blessed to see the birth of his first two great grandchildren. Those who were fortunate to know Arthur will miss the warmth, kindness and generosity of a beloved family man.

A mass of remembrance and a celebration of Arthur’s life will be held for family and friends at a future date.

Beloved husband of Joan (Harrold).  Loving father of Dale Strachan & her husband Joseph of Bedford, Stephen Thompson & his late wife Patricia of Yarmouth Port and Lori Delisle of Boxborough. Proud grandfather of Jennifer (Strachan) and her husband Richard Volpicelli of Chelmsford, Joseph Strachan, Jr of Brighton, Colleen (Strachan) and her husband Cameron Becker of Medford, Emily Thompson of Medford and Ensign Patrick Thompson, U. S. Navy of Norfolk, VA.  Great grandfather of Nicholas and James Volpicelli.  Brother of Edward Thompson of Falmouth and Gloria Corrado of Burlington.   Funeral Services will be private.  In lieu of flowers memorials in Arthur’s name may be made to the Aberjona Nursing Center, 184 Swanton Street, Winchester, MA 01890.   Arrangements under the direction of the Edward V Sullivan Funeral Home, Burlington. For obituary, online guestbook and memorial video see www.sullivanfuneralhome.net

Share Your Memory of
Arthur
Upload Your Memory View All Memories
Be the first to upload a memory!