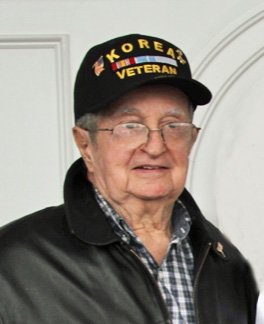 John G. Conti, affectionately known as “Papa John” by all those who knew him and loved him, passed away at the Winchester Hospital on Tuesday evening, April 28, 2020.  The beloved husband of the late Mary (Ciccolo) who passed away on February 4, 2020, he was 85 years old.

John was born and raised in Hyde Park.  He was the son of the late Nancy (Andreozzi) Conti.  After high school, he served his country in the United States Navy during the Korean War.  He was the recipient of National Defense Service Medal, Good Conduct Medal and Navy Distinguished Service Medal.  John was immensely proud of his service to his country.  After being discharged from the Navy, he married his high school sweetheart Mary Ciccolo.  They were married on October 20, 1957.  They raised their family in Hyde Park and were active members of the community.   John was an avid softball player.  He was the founder and President of the Hyde Park Softball league and subsequently received a proclamation from Governor Sargent and was named “Mr. Softball”.  He played softball, coached softball and ran several leagues.  John’s passion for softball was so great that when his wife Mary went into labor during a game, John asked her if she could just wait until the game was over!

John worked hard to provide for his family.  He attained a degree in Criminology from Newbury College, Boston. He was the Chief of Police for Simmons College in Boston.   In 1991, John and Mary made the decision to leave the city and move to Burlington to be closer to their children. John immediately became entrenched in the community, just like he was in Hyde Park.  He became a regular at the Burlington Council on Aging enjoying card games with his many friends and participating in their numerous activities.  As well as veteran related activities in the Town.

His grandchildren were his everything and he was a devoted “Papa” to them.   There wasn’t anything he wouldn’t do for his grandchildren including setting up his backyard in Burlington as a replica of Fenway Park that even included the famous “Pesky Pole” so they had a fun place to play ball!  Papa cherished his grandchildren and always participated in various activities around town!  He was so proud of his grandchildren and was in attendance at the multitude of practices, games, plays and dance recitals.

John was a devout catholic and a member of St. Malachy’s in Burlington.  He considered his fellow parishioners as part of his family and was a fixture at the 4:00 Mass on Saturdays.   John had a huge infectious personality.  To know him was to love him. He was a people person always socializing and loved to tell stories.  John’s passing leaves his family with a heavy heart and a huge void in their lives,  but they are at peace knowing that John has been reunited with his best friend and love of his life, his wife Mary, whom he was married to for 62 years.

John was the beloved husband of the late Mary F. (Ciccolo).  He was the loving father of John & his late wife Ally of Walpole, Nancy Conti-DeCarlucci & her husband Matthew DeCarlucci, Rosemarie Conti & her husband Ronald and Paul & his wife Deborah all of Burlington. Proud grandfather of Raphy DeCarlucci, Gina, Joey, Alexander, Jack, Niko & Paul J. Conti. Brother of the late Eleanor Hunsberger and Amando Conti. John is also survived by many nieces and nephews.  Funeral Services will be private.  John’s family will have a Mass said for him at the 4:00 PM Mass at St. Malachy, a church that he loved, at a future date.  In lieu flowers, memorials in John’s name may be made to Edith Nourse Rogers Memorial Veterans Hospital, Care of Unit 78C, 200 Springs Road, Bedford, MA 01730