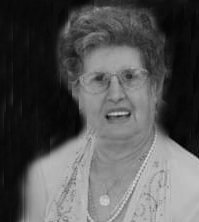 Fermina Eleanor (Vagnati) Zaganjori passed away at the Woburn Nursing Center on Tuesday morning, May 12, 2020.  The beloved wife of the late David Zaganjori (Daut Sheqi).

Fermina was born Gaeta, Italy, where she was raised and educated there. She met her husband David in Italy, and later they were married in Rome. Fermina and David (Daut) came to the United States for better employment opportunities. They raised their two sons Alexander and Frank in Cambridge, and in 1996 they moved to Burlington.

She was a kind and loving mother.  She enjoyed knitting and crocheting.  Fermina was a devout Catholic and her faith was an extremely important part of her life.   She said the rosary daily.  Fermina was a member of the Saints Cosmas and Damian Society, which consisted of a large group of immigrants from the coastal city of Gaeta, Italy that settled in Cambridge and Somerville.  The community brought a sense of belonging and cohesion to Italian immigrants who, like Fermina, had come to this new country.

Fermina loved her three grandchildren: David, Nadia and Grace. She took great pride in all their accomplishments and loved to talk about them.  Fermina will be remembered as a truly kind woman who loved God, family and friends.

Share Your Memory of
Fermina
Upload Your Memory View All Memories
Be the first to upload a memory!