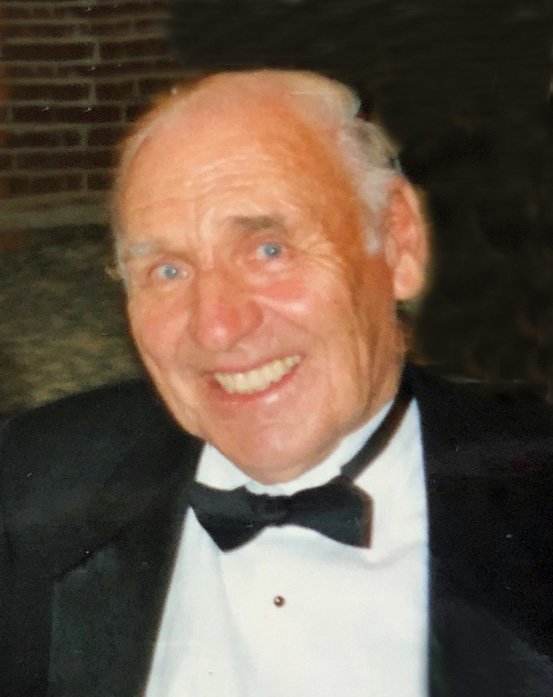 Clicking on the link (above) will bring you to the funeral home's facebook page (sign-in is NOT required).  Service will begin at approximately noon on Thursday, July 23rd.

John V. “Hank” McCullough, Jr., a retired mason, passed away on Friday, July 17, 2020.  He was 90 years old.  Hank was born in Chelsea.  He was one of two sons of John and Ann McCullough.  Hank grew up in Chelsea and was a graduate of Malden Catholic High School in 1948.  He enlisted in the Navy during the Korean War.  He served at Midway and then spent much of his service time in Japan as a member of the Naval Construction Battalion TWO and held the rank of BUL3 (Builder Petty Officer 3rd Class).  The Battalion constructed the U.S. Naval Air Station Atsugi to support the war effort in Korea.  After his discharge, he returned to Chelsea and started courting his future wife Janet MacDonald.  They were married in 1954 and settled in Burlington in 1955.

Hank worked as a mason and a member of the Bricklayer & Allied Craftsman Union, Local 103 for almost 40 years. He was proud to have followed in his father’s footsteps and to have worked alongside him on projects for many years. Over the years he worked on large and small construction projects all over the Boston and the surrounding communities. While driving with his children and grandchildren, Hank would point out buildings that he helped build.  He had an incredible work ethic and took great pride in his craft.  He taught many a young apprentice the skills and values necessary to do well in the trade.  He worked on Lafayette Place, Bentley University, the steps of the Old State House, and countless schools in the Boston area. Some of his local Burlington area projects included the RCA Building, the Meadowbrook and Marshall Simonds schools, Saint Margaret’s Church, where he was also a parishioner for over 60 years, and countless homes of relatives, friends, and neighbors.

Hank was the epitome of a family man.  He took great pride in the family Burlington home, doing much of the maintenance and work on the structure himself.  To be sure, many of the home renovation projects included custom brick features.  When his children were growing up, Hank and Janet owned a summer cottage on Lake Winnisquam in New Hampshire, right next to the cottage owned by his brother, Don.  The families raised their children together on the lake.  Hank wasn’t much for sitting on the beach, but was happy building swing sets, playing horseshoes and cribbage, maintaining the property, and holding court on his porch on Friday nights with all the other fathers in the association.   He was a very active member of the Burlington Knights of Columbus, helping in its charitable activities, fundraisers and socials.  Hank was an avid golfer and a regular at the Leo Martin Golf Course in Weston.  He was well versed in the world and could talk about almost anything including history, politics, sports, local and world events and countless other topics.  He had strong values and wasn’t bashful to point out both the good and bad in the world.  During his later years when he was less mobile, Hank got hooked on the app called “QuizUp”, which is one of the biggest on-line trivia games in the world.  At one point, Hank was ranked number 1 in Massachusetts and 2nd in the world in a variety of categories.  It was too bad that in his younger days, Hank did not try out for Jeopardy.

Hank was man of principle and he taught his children to take pride in their work and communities, respect others, be kind and accepting, and always think of others first.  He will be missed, but never forgotten (especially by Mary’s dog Daisy who spent countless hours by his side).

John was the loving husband of Janet (MacDonald). He was the loving father of Lisa Thompson of Rochester, NH, Jack McCullough & his wife Beth of North Andover, and Mary Resendiz & her husband Gus of Andover. Brother of the late Donald McCullough of Windham, NH. Proud grandfather of Alex, Sarah, & David Thompson, Devon & Hunter McCullough, and Nick, Katie & Danny Resendiz. He was the great grandfather of Cameron and Paisley Janet.  A visitation will be held at the Edward V. Sullivan Funeral Home, 43 Winn St., Burlington (exit 34 off Rt. 128/95, Woburn side) on Thursday, July 23 from 10-11:30 a.m.  A Mass of Christian Burial will be celebrated on Thursday at St. Margaret’s Church, 111 Winn St., Burlington at Noon.  Services will conclude with a burial in Pine Haven Cemetery, Burlington.  For directions, obituary, online guestbook, and video tribute see www.stmargaretburlington or www.sullivanfuneralhome.net. In lieu of flowers, memorials may be made to Melmark, New England, https://melmarkne.ejoinme.org/MyPages/DonationPage/tabid/158453/Default.aspx.aspx

Good afternoon.  On behalf of my sisters Lisa and Mary, I want to thank you for coming to pay your last respects to my father, John McCullough, Jr.  We know these are unusual times, so we are grateful that you were able to join us today.

My dad grew up in Chelsea Mass.  He was born in 1930, less than a year after the start of the great depression.  While dad did not talk much about his childhood, I believe that living such a modest lifestyle in his childhood profoundly affected him… in a good way.  He was raised in a devout Catholic family, and faith in God was an important part of his life.  He was extremely close to his parents, and protective of his brother, my Uncle Don.  Actually…he exploited Uncle Don.  When my dad was a boy, he had a paper route to help the family out.  Uncle Don was about five years younger than Dad, and apparently much cuter.  On collection day, dad would bring Uncle Don with him, because the women thought he was so cute with his blonde hair and curls, which resulted a bigger tip for dad.

Dad’s Chelsea roots played a big role throughout his life.  He was very loyal and maintained his childhood friendships.  His best friend was my Uncle Bruno.  He and my dad married sisters and were like brothers.   Also, when he bought our summer home, many of the other homeowners were friends from Chelsea.  He also had several head-scratching phrases that one rarely heard non-Chelsea people use.  Ham-and-egger.  Get my goat.  Pig’s Arse.   Croak ‘em.  And a smattering of others I can’t repeat at a Catholic ceremony.

So, what was my dad like?  He was in some ways, a man of contradictions.   He was an introvert, who could occasionally be the funniest person in the room.  Cheap but generous.  Intimidating but gentle.

A lot of my memories of my dad took place at the cottage in New Hampshire.  He really loved it up there.  My mother, my sisters and I lived up there all summer while Dad stayed at home and worked.  I remember how excited we were when he would pull up on a Friday night, and how sad I was when he would leave on Sunday.  Dad was quiet but our front porch was a popular weekend destination for the men to have a drink and catch-up.  I remember watching my father play what seemed like a million games of cribbage or horseshoes.  He and my uncle Don were sort of the neighborhood champions in both. Dad was a great trash-talker before trash-talking was a thing.  I also remember how proud he was when I finally was able to beat him at horseshoes, on occasion.

I had great fights with my dad, often about sports.  I would sometimes take the opposite side just to get a reaction out of him.  Bill Russell vs Larry Bird. He was probably right about that one.  Ted Williams vs. Barry Bonds.  Yeah, I’ll give him that one, too.  About a year ago we argued Bing Crosby vs. the Beatles.  Yes, that was the level.  My dad thought Bing Crosby was better than the Beatles.  But all in fun.  Dad liked a good fight.  Even if I got his goat.

One of Mary’s favorite memories was when he would surprise her at her out-of-town basketball games.  He’d show up unannounced at her games, and they would usually go out to dinner afterwards.  I know parents aren’t supposed to have favorites….but come on.  That was not a well-kept secret, and it was wonderful that Mary and her family were able to care for dad in his last few years.  My sister Lisa was also very close to him, as they spoke every day.  Those calls meant more to Dad than you probably realize, Lisa.

I also remember how he took care of the love of his life, my mother, during her last few years.  My mother had dementia which became Alzheimer’s.  It is a very dehumanizing disease, and especially painful for the family.  Mom and dad were together over six decades all in, and his love for my mother never stopped.  He visited my mother every day, often alone, even though it was heart-breaking as she forgot who we all were and eventually did not recognize even him.  But he was very dedicated and showed us what love and commitment were all about.    After Ma passed, Dad would often become sad and would talk about reuniting with her in heaven.  I’d respond that Ma was definitely in heaven, but in his case it could go either way.  He loved a joke, especially at his own expense.

Dad was a history buff and was quite well read.  He was impossible for any of us to beat at Trivia.  You would ask him obscure things – like, say, the Franco-Prussian War – and he could have a conversation about it.  My nephew Danny recently learned that he played more than 30,000 games on Quizzup, an online trivia contest, and that he was among the best in the world at a handful of topics.  To the surprise of nobody who knew him.

Professionally, dad was a Mason.  He was not ambitious, at least not in the traditional sense.  He was not a rich man and did not want to be.   He simply wanted to be the best mason that anyone could hire.  He wanted to do great work for his clients, he wanted to take care of his crew, and he wanted to have fun.  He also wanted to provide a good life for his family.  He was successful on all fronts.

I once asked my dad what he liked most about his job.  He told me that each building he built would outlive him, and this would be his legacy.  I think he had that wrong.  His legacy is largely here today.  Alex.  Sarah.  David.  Nick.  Devon.  Katy.  Hunter.  Danny.  You are my father’s legacy.  You can honor him by continuing to be your best version of yourself.  Love your family.  Work hard.  Be fair.  Be nice.  That was Dad.  A simple man, but a great one.