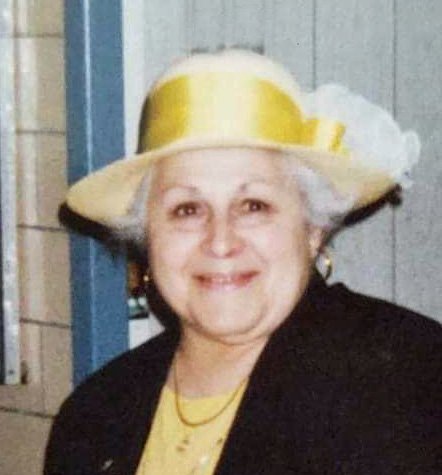 Clicking on the link (above) will bring you to our facebook page (sign-in is NOT required).

Antonina “Lena” Helena (Arena) Mazzola, 97, of Burlington, formerly of Woburn and Cambridge, passed away on August 29, 2020 peacefully with family by her side. Lena was born to Guiseppe and Concetta (Donato) Arena (originally from Messina, Italy) on May 29, 1923 in Roxbury, Mass. She married Astillo “Austy” Mazzola two months after he returned from 5 years in the Army during WW II.  The wedding took place on January 20, 1946 at St. Leonard’s Church in Boston’s North End. They were married 53 years until his death in 1999. They moved from Arlington to the Winnmere section of Burlington in June 1956 where they raised two children.

Lena is survived by one daughter, Geraldine Marion and her husband Armand of Burlington. She was predeceased by her son, Lucius “Lou” Mazzola; as well as by her five younger brothers: Captain Joseph, Antonio, John, Salvatore and George Arena. She was a wonderful Nonna to her 5 grandchildren: SSG Amanda Marion stationed in San Antonio, TX; Rebecca Marion and husband Mohamed Fakir and her only grandson, Christopher Marion, all of Burlington, and Tiffany Mazzola of Florida. Lena was predeceased by her oldest grandchild, Karla Mazzola. Lena was “Great Nonna” to Kristin Diaz, Michael Marion, and Anthony and Damian Mazzola

Lena will be most remembered for her generous and courageous decision to donate her kidney to her brother George. This kidney transplant, “Gift of Life” was an unprecedented medical procedure performed at The Peter Bent Brigham Hospital in Boston on May 15, 1970. She and her husband also became Foster Parents working with the Catholic Charitable Bureau of Boston from 1949 to 1969. They fostered over 200 infants, sometimes caring for two infants at a time until placed for adoption.

Raising her family in the 50’s and 60’s was a busy time for Lena. She became Den Mother to her son’s Cub Scout troop, and later a Girl Scout leader to her daughter’s Brownie troop. She also volunteered at the Memorial Elementary School, as a seamstress, sewing all the costumes for the school plays. She volunteered, as well, in both her son and daughter’s classrooms. In the 60’s she joined the Burlington Garden Club and used her love for flowers and planting to learn to create beautiful rock gardens throughout the family’s home on Mountain Road. She created a Lady Bug costume to wear while marching in the Memorial Day Parades with the Club. She also enjoyed decorating the 4th of July Floats with all sorts of flowers, plants, and shrubs, designing a Nursery Rhyme float with the Club. She also belonged to the St. Margaret’s Church Choir and chaperoned the CCD dances held in the old St. Margaret’s hall on Center Street.

She had many jobs in her lifetime. She worked “the line” during WWII stitching medical and surgical coats for the doctors and nurses overseas. She stitched fabric onto car seats, on an assembly line, in the once well-known Auto Seat Covers Factory. She worked “piece work” stuffing mattresses at Simonds Mattress Factory. In her later years, she worked in the Dietary Department in both the Choate Memorial Hospital as well as Winchester Hospital serving food trays to patients. She loved this job and the friendships she developed, especially with the patients.

After the transplant, Lena volunteered countless hours for the Kidney Transplant Dialysis Association, working side by side with her brother George, to get the word out “Transplant Kidneys, Don’t Bury Them”. She was instrumental in starting the first Organ Donor Program held at the Burlington Mall in the mid-1970’s. This program allowed donors to have a card attached to their license to show that they were organ donors. She also became the President of the Middlesex County, Lexington Chapter, of the KTDA. She worked vigorously to bring awareness to the public regarding kidney disease and organ donation.

Lena loved her grandchildren and great grandchildren. She was always knitting and crocheting blankets, and baby outfits, blankets, hats, and mittens. She enjoyed needlepoint as well and made each child a prayer to hang in their rooms. She loved looking through catalogs and would pick out something special just for that one particular child. She never forgot a birthday or holiday and always had “a little something” in her purse, when she saw them. She felt very blessed that she lived long enough to have made lasting memories with them. She loved it when Michael would visit her in the Nursing facility. He always made her and the residents happy. When Kristin would visit, she would always work on huge puzzles with Great Nonna. She would also entertain the residents by playing piano in the community room. Lena was immensely proud that Kristin enjoyed playing the piano as she, herself, learnt to play the piano at an early age, after the Great Depression. She played concerto music and had quite a catalog of music. She also composed her own music including her own piece of concerto music as a teenager. She always played this piece any time she was near a piano, in the nursing facility as well.

Her years in the Nursing facility were difficult at times; however, she passed the time reading. She loved newspapers, all types of magazines, and loved biographies of the old Hollywood stars. She enjoyed crossword puzzles of all kinds, the more difficult the better. She also was asked to volunteer her time knitting infant caps for the preemies still in the hospital. We lost count on how many she made. She also made caps for the CNA’s who had babies and loved to hear about their families.

Lena’s storytelling of “years gone by” and family history and antidotes will be greatly missed by her family. They feel so very fortunate to have had her in our lives for as long as we did. Ciao Bella!!

A visitation will be held at the Edward V. Sullivan Funeral Home, 43 Winn St., Burlington (exit 34 off Rt. 128/95, Woburn side) on Saturday, Sept. 5 from 10-11:30 a.m. Followed by a Mass of Christian Burial in St. Margaret Church, 111 Winn St., Burlington at noon. Services will conclude with a burial at Chestnut Hill Cemetery, Burlington. For directions, obituary, online guest book, video tribute and simulcast of the funeral mass see www.burlingtoncatholicma.org or www.sullivanfuneralhome.net

Share Your Memory of
Antonina
Upload Your Memory View All Memories
Be the first to upload a memory!