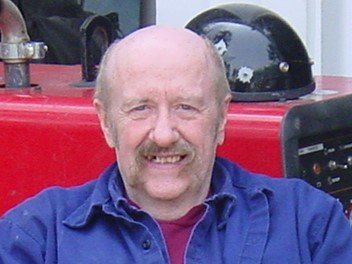 Donald E. Crockett, a man who worked hard to provide for his family, passed away at his home on Friday morning, Sept. 4, 2020. The beloved husband of the late Anna B. (Holler) he was 86 years old.

Don was born in Lawrence. He was raised and educated in Medford.   He was the son of the late Francis and Marion Crockett.  After high school, Don served his country in the United States Marine Corps during the Korean War.  He served from 1953 – 1956 and achieved the rank of Sergeant.    Don was the recipient of the Good Conduct Medal and the National Defense Service Medal.   Don was proud of his service to his country and most especially “proud to be a Marine”.

Don would meet the love of his life, Anna, in the eighth grade.  They were childhood sweethearts and the best of friends.   They married in 1954 and moved to Burlington in 1960.

Don’s life was all about his family and his work.  His work was his “hobby” and he worked seven days a week!   Don had a long career in the automotive industry which he loved and thrived on.  He was still working the week before he passed away.  Don owned Don’s Auto Parts on Cambridge Street in Burlington for many years.  He then worked at Rogers Auto Parts in Billerica where he retired from.  Don missed working and opened “Don’s Stuff” on Boston Road in Billerica which sold motorcycle and vehicle accessories.   With his outgoing personality and amazing knowledge about cars, trucks, motorcycles, and equipment his retail stores were the perfect job for Don.  He was dedicated to his customers and would do anything for them.   Don’s customers found him friendly, approachable, helpful, and genuinely kind.   He will be remembered as a loving husband, father, grandfather and friend to all.

Don was the beloved husband of the late Anna B. (Holler).  He was the loving father of Paul & his wife Brenda of Burlington and Craig and Fiancée Janet Sherman of Wilmington.  Proud grandfather of Zachary, Autumn & Alex.  Brother of Bruce of Tewksbury, Kathy Pullum of Alabama and the late Lois Cox.  Father-in-law of Ann Danielson of Wakefield.  Visiting hours will be held at the Edward V Sullivan Funeral Home on Thursday, Sept. 10 from 5-8 p.m.  Graveside services will be held at Chestnut Hill Cemetery, Bedford St., Burlington on Friday, Sept. 11 at 9:30 a.m.  Relatives & friends respectfully invited to attend.   In lieu of flowers memorials in Don’s name may be made to Beth Israel Lahey Health at Home, 500 Cummings Center, Suite 3570P, Beverly, MA 01915.

Share Your Memory of
Donald
Upload Your Memory View All Memories
Be the first to upload a memory!