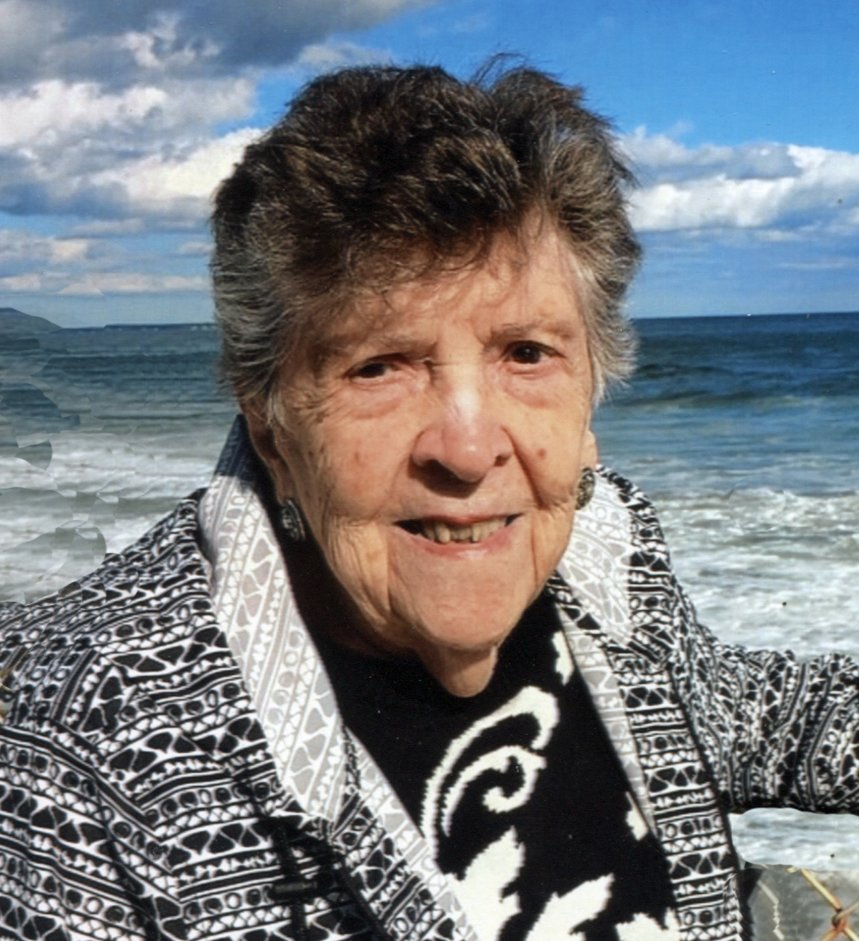 Clicking on the link above will bring you to our facebook page (sign-in is NOT required).  Funeral service will be live on Tuesday, September 22nd, at 12:30pm.

Dorothy W. (Wallace) Barron, a retired library assistant at the Burlington Public Library, passed away at the Lahey Hospital and Medical Center in Burlington on Wednesday morning, September 16, 2020.  Dot was 95 years old.

Dot was born in Boston. She was the youngest of six children born to the late Edwin and Della Wallace. She was raised and educated in Somerville.  Prior to her marriage Dot worked at Baker Library at Harvard Business School.  She was immensely proud to work at such a prestigious school.  Dot would meet her future husband Warren in 1950.  They would marry in 1953 and move to Burlington in 1954, where she would become an active member of the community.

Dot was a “stay at home” mom while her children were growing up.  She was a great cook and she loved to bake. Dot was a talented seamstress and made all her own clothes as well as her daughter Pat’s clothing.  After Pat and Rick were out of school, she resumed her career.  In 1972 she went back to work at the Burlington Public Library, retiring in 1990.  She loved her job and her interaction with the residents of Burlington.  Dot was a woman ahead of her time in many ways.  She represented her fellow employees at the Library and helped them obtain better pay and benefits.  Dot did this by helping to create the Burlington Municipal Employees Association.

Dot led an active and full life outside of her home and work.  Dot and Warren enjoyed taking trips to Atlantic City and Las Vegas. She spent many years vacationing in Ogunquit ME with her children and grandchildren.  She loved a good game of cards and dominoes.  Once a week, for over 60 years, Dot would play a game of Bridge with her “bridge group”.  Her grandchildren were the “apple of her eye” but her great grandchildren were the “loves of her life”.  She was blessed to see the birth of her great grandchildren; Nicholas, Kennedy & Liam, who she loved to spoil.

Dot will be remembered as a classy woman who always knew the right thing to do and was always there for family and friends.  She lived a fulfilling life and will be missed by all that knew her.

Dot was the beloved wife of the late Warren F. Barron.  She was the loving mother of Patricia Beaver & her husband Michael of ME, formerly of Westford and Richard W. Barron of Purcellville, VA.  Proud grandmother of Anne Giordano & her husband Matthew of NH and Mark Beaver of NJ.  Adoring great grandmother of Nicholas, Kennedy & Liam.   Sister of the late Mary Brooks, Ruth Dunn and Evelyn, Edwin & June Wallace.  A visitation will be held at the Edward V Sullivan Funeral Home, 43 Winn St., BURLINGTON (Exit 34 off Rt. 128/95 Woburn side) on Tuesday, Sept. 22 from 10:30 – Noon.  Followed by a Mass of Christian Burial in St. at St. Margaret Church of St. Veronica Parish, 111 Winn St., Burlington at 12:30 p.m.  Burial to follow in Chestnut Hill Cemetery, Burlington.  In lieu of flowers, memorials in Dot’s name may be made to the Burlington Public Library, 22 Sears St., Burlington, MA 01803.

Share Your Memory of
Dorothy
Upload Your Memory View All Memories
Be the first to upload a memory!