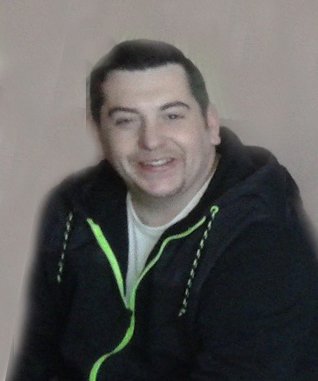 Erik Michael Mitrano passed away from a brain aneurysm on Tuesday October 13th, 2020 at the young age of 33.

Erik was born in Winchester, grew up in Burlington, and was a graduate of the Burlington High School Class of 2005.  He attended Middlesex Community College where he explored different interests.

Growing up, Erik was a fun loving, imaginative child who loved playing with action figures (aka his men) and continued displaying some as an adult, even those figures that were missing an arm or leg that his best Labrador friend Kayla, had chewed off.  This was his way of remembering his beloved canine friend.  He then became involved in and enjoyed competitive ten-pin bowling and golf.  As a young adult, he loved attending Celtics games with his brother and was always happy to say he was there with his brother Paul at game 6 when the Celtics won the 2008 Championship.

As an adult, Erik became an articulate conversationalist with strong political views who loved to engage in political conversations, always being respectful of differing views, while simultaneously trying to sway others to his side.  He was tough to dispute due to his detailed knowledge and reasonable approach.  He was a history buff whose go-to programming was the History Channel.  He was also an avid reader of biographies.    His general fund of knowledge was always on display during father and son Jeopardy competitions that Erik would generally win.   On the lighter side, he enjoyed horror movies, the UFC and 1970s and 80’s music.  Erik always took pleasure in the smaller things in life.

Erik will always be remembered as a loving, kind, generous, big-hearted kid with a great sense of humor and a contagious laugh.  He lit up any room he entered with his smile and laugh.  His generous spirit continued in death as an organ donor.  He continued on life support for several days until his organs could be harvested to give others the gift of life.  His family takes comfort in knowing that while he passed way too young; his spirit will truly live on in those he gifted.  We are very proud.

Erik was the much loved son of Paul and Adele (Johnson) Mitrano of Burlington.  He was the loving brother of Paul Jr. and girlfriend Krystelle Dagata.  He was the grandson of Kathryn Johnson and the late Arthur Johnson of Medford and Joseph Mitrano and the late Judith Mitrano of Woburn.   He was the much loved nephew of Thomas and Sonja (Johnson) Murphy of Woburn, Donna (Mitrano) Taylor of Tewksbury, David and Ann Taylor of Merrimack, Joseph Mitrano Jr and his wife Sia Tsihlis Clark of Burlington and Charles and Noreen (Mitrano) Trudel of Ipswich along with cousins David Taylor, Derek Taylor and Christianne Trudel.

In lieu of flowers, please consider a memorial donation in Erik’s name to The Make a Wish Foundation.

Share Your Memory of
Erik
Upload Your Memory View All Memories
Be the first to upload a memory!