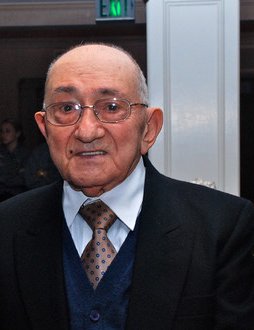 The Funeral Mass will be private for the family but all are welcome to watch a live-stream of the Funeral Mass for Angelo on Saturday, November 7th at 10 a.m.  by going to St. Barbara’s website www.woburncatholic.org

Angelo C. Cabral passed away at his home in Woburn on Tuesday evening, November 3, 2020, the beloved husband of Angela (Aguiar) he was 97 years old.           Angelo was born in São Miguel, one of the islands in the Azores.  He was one of three children born to the late José and Maria da Conceição Cabral.  He was raised and educated in São Miguel and would meet his future wife, Angela, when he was 19 and she was 14.  They would marry after Angelo served his country in the Armed Forces of Portugal at the age of 24 and 19.   Angelo was an entrepreneur during his lifetime. In the early years of his marriage, he owned and operated a barbershop and owned the only photography studio in town. For many years Angelo owned a grocery store and managed a milk-processing center prior to coming to the United States.  The business was very successful, and he was well respected by everyone.  His store was the gathering spot for all the neighbors.    Angelo and Angela were devout Catholics and their faith a very important part of their lives.  At the time they were living in São Miguel not many people had cars, so the only way to get to church was to walk.  As many of the residents became older, walking to church became more difficult.  Angelo and Angela came up with the idea of building a Catholic Church in their community.     With the help of many of their town residents, Angelo and Angela spearheaded the building of the church, including all the fundraising.  The name of the church is Our Lady of Fátima.

In 1968 Angelo made the decision to come to the United States so that his eight children could benefit from better educational opportunities.  He first came by himself and later the remainder of the family joined him.  They lived in Somerville and eventually settled in Woburn in 1984.  While in Somerville, Angelo was an AMWAY product distributer for several years. He worked hard to provide for his family and worked as a Custodian at Tufts University for many years.

Angelo loved to welcome people into his home.  The pool in their backyard was the gathering point for many barbeques, and it was where some of his children and grandchildren learned how to swim.  His hobby was his vegetable garden, which he took great pride in.    Angelo continued his devotion to his catholic faith with his move to the United States.  He was a Eucharistic Minister at St. Anthony’s in Cambridge.  After his retirement, he and Angela would attend daily Mass at St. Barbara’s in Woburn.    Angelo lived for his family and was so proud to see his legacy grow to 17 grandchildren and 15 great grandchildren.   He will be remembered as a family-oriented man whom everyone loved and admired.  Angelo and Angela would have celebrated 73 years of marriage on December 18.

In lieu of flowers memorials in Angelo’s name may be made to the National Kidney Foundation, 30 East 33rd St., New York, NY 10016  www.kidney.org

Share Your Memory of
Angelo
Upload Your Memory View All Memories
Be the first to upload a memory!