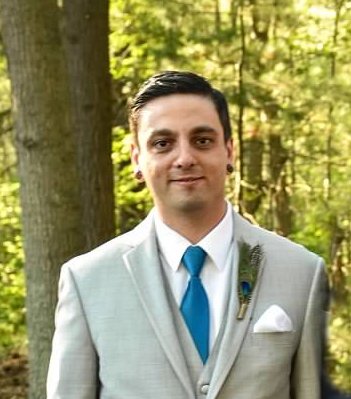 Evan R. Lunny, creator and host of the podcast “Recipes and Records, passed away suddenly on Wednesday, November 18, 2020.  He was 35 years old.  Evan was born in Waltham.  He was the son of Thomas and Joanne Lunny.  He grew up in Burlington and was a member of the Shawsheen Technical High School’s Class of 2003 where he studied graphic design.  He attended The New England Institute of Art in Brookline where he continued his studies in graphic design.  He was a longtime employee of Starbucks in Lynnfield where he was a shift manager, coffee barista, and employee trainer.  He loved working with his fellow employees and interacting with his many regular customers.

Evan was a truly special young man who didn’t always follow the norms.  He embraced life, had a creative mind, wanted everyone around him to be happy, and followed his own direction when it came to arts and music.  He loved music; one of his favorite bands was “Into It. Over it” which rarely matched the more popular music of the day.  He loved going to live performances and for him the only place to watch a band perform was in the mosh pit, in front of the stage.  He used his graphic art skills to create some album covers and posters for some of friends’ bands.  He was always the first one on a dance floor and never cared what others thought of his animated and high energy dance moves.  He could be the “life of the party” when he wanted to be.  Evan was also a talented cook and loved working in his kitchen creating delicious meals.  His fettuccine alfredo, risotto, and ramen were the favorites of his family and friends.  Being the creative person he was, he decided to combine his two passion; music and food, into a podcast called “Recipes and Records”. His idea was to connect with friends over a good meal and good music.  So, each week he would sit down with a guest and prepare a meal for them and after the meal discuss their favorite record of all time, recent years, or right now.  His artistic juices were really flowing.  He had aired ten episodes to date.  He was so excited about the project and had so many other ideas in the works.  He had a magnetic personality, was kind and sensitive, generous to a fault, funny, a bit sarcastic at times, with a dry sense of humor.  He was the fun uncle that everyone remembers, who loved acting like a kid having sword and water gun fights.  He epitomized the cliché of “a bright and shining star” that left us all too soon.

Evan was the beloved son of the late Thomas and Joanne (Bourque) Lunny.  He was the brother of Colleen Plant and her husband Jason of Burlington.  He was the partner of 7 years and fiancée of Matthew Letson of Wrentham.  He was the fun uncle of Tyler and Mason Plant of Burlington.  Evan was also survived by many aunts, uncles, cousins, and friends.  A visitation will be held at the Edward V. Sullivan Funeral Home, 43 Winn Street, Burlington, on Monday, November 23 from 5:30 to 7:30pm.  Relatives and friends are respectfully invited.  In lieu of flowers, memorials in Evan’s name may be made to the American Heart Association, 300 5th Ave., Waltham, MA 02451 or www.heart.org.

Share Your Memory of
Evan
Upload Your Memory View All Memories
Be the first to upload a memory!