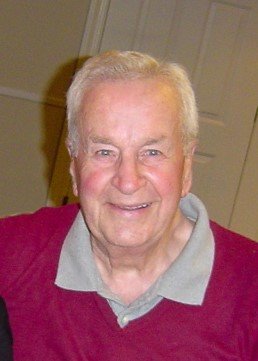 George R. Darling, a retired Electrical Engineer and Veteran of 2 wars, passed away on Tuesday afternoon, December 15, 2020 at the age of 95. George was born in Dedham and resided in Burlington for the past 41 years. He was one of 7 children born to Ellery and Katherine Darling.  He grew up in Dedham and was a graduate of Dedham High School where he played football and basketball.  At the age of 17, he enlisted in the Merchant Marines and served his country during World War II transporting troops and supplies.  George returned home and went back to school at Wentworth Institute and then Northeastern University where he earned his bachelor’s degree in Engineering.  At the outset of the Korean War, George enlisted in the Army and served 2 years as a Sergeant in the R &M Co, 50th Signal Battalion Corps where he spent 1 year overseas in Japan as part of the Army of Occupation. George worked as an electrical engineer for most of his career.  He started with ITEK and then moved to MITRE where he worked until his retirement.

George will be remembered as a man of strong faith who was very lively, personable, well spoken, extremely knowledgeable, and kindhearted.   George was an avid outdoorsman who enjoyed fishing and hunting with his Brittany Spaniel companion by his side.  He had an outgoing personality and could talk at length about almost anything.  George was a social and helpful neighbor who spent time volunteering for the community, including cooking for the homeless.  He enjoyed spending time with family and friends and his summer home on Cape Cod was a gathering spot through many decades.

Due to COVID restrictions, a private Mass of Christian Burial will be celebrated at St. Margaret Church in Burlington followed by an interment in Chestnut Hill Cemetery, Burlington. Memorials in George’s name may be made to People Helping People, P.O. Box 343, Burlington, MA 01803. For obituary and online guest book see www.sullivanfuneralhome.net.  Arrangements by the Sullivan Funeral Home, Burlington.