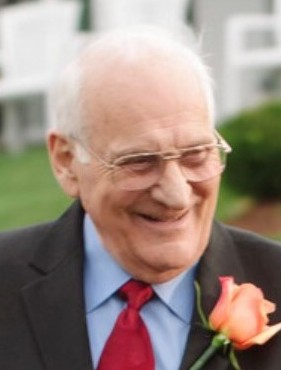 Robert S. Matarazzo, a man involved in Burlington Politics for over 35 years, passed away after a very brief illness with his children at his bedside on Monday night, January 11, 2021.  He was 85 years old.  Bob was born in Somerville.  He was one of eight children born to Italian immigrants, Joseph and Michelina “Margaret” Matarazzo.  He grew up in a modest home in the Ten Hills section of Somerville.  He was a graduate of Somerville High School.  Bob lived by values that he learned from his family including working hard, family came first, cooperation, and to be kind to everyone.

Bob had several careers over the years.  The first, was that he worked as a barber in his father’s barber shop in Somerville alongside his brother Tony.  He then spent over 40 years in the liquor industry as a salesman and manager. He had customers in both large and small liquor stores and restaurants.  In his retirement years, he spent almost 10 years at Crystal Transport, as their Vice President of Sales and Marketing.  His retirement job from his retirement job was that of crossing guard for the Town of Reading which he did up until this past December of 2020.  Bob was successful for many reasons, but most importantly was his personality.  He was a natural salesperson who loved people.  He had the gift of being able to remember everyone’s names and their family as well.  He also was able to make a connection with almost everyone he met.  He start chit chatting and then the conversation would move forward and in the end he always found something in common may it be a mutual friend, a hobby, interest, work, family…..   He was unpretentious, a go getter, and always had his customer’s best interest first.  Bob just like interacting with others so much that he couldn’t retire because it never felt like work.

The residents of Burlington benefited from Bob’s values and public involvement.  Ever since moving into his home in the Winnmere section of Burlington in 1967, he has been involved in his neighborhood, the community, and local politics.  He served Burlington as a Town Meeting member, Housing Authority, Board of Health, Selectman, and countless other subcommittees and groups.  As a politician, he was fair, approachable, and respected other’s viewpoints even if they didn’t align with his.  He could have a lengthy and heated debate at a meeting and then go out to lunch with his opponent the next day.  The residents of Burlington knew that they could call Bob if they had a problem, needed guidance, or had a particular view on a town issue.  Bob might have agreed with them completely, but he knew that they needed express their views and he was happy to have candid discussion.  During those years in local government, Burlington was growing exponentially, and Bob worked alongside his fellow elected officials and residents of Burlington to get the Lahey Clinic Hospital to move to Burlington and countless other quality companies while balancing the needs of the residents.  Bob was one of those special people who laid the foundation and made Burlington such a special place to live and raise a family for which the residents present and past with forever be thankful.

Bob growing up in a family of ten learned the importance of family and cooperation.  He was deeply involved in his children and grandchildren’s life’s.  Nothing made him happier than when they were all together sharing a Sunday meal, a holiday, family celebration, or even a short visit.  His family watched and learned how he treated everyone with respect and kindness.  They also enjoyed how he was such a great cook!  His raviolis, meatballs, and pasta dishes were family favorites.  The summers were spent as a family at their vacation home in Salem, New Hampshire on Arlington Pond.  There was swimming, boating, cook outs, and countless memories filled with laughter and love.  The family also had a yearly trip in the summer to Frank Davis resort, where Peg and Bob also celebrated their 50th wedding anniversary.  He supported and encourage his children in their life choices and simply had fun with all his grandchildren and great grandchildren.  Bob’s friends were friends for life.  He enjoyed trips to Foxwoods and weekly poker nights with his friends.   The Matarazzo family and the residents of Burlington have truly lost a special man with Bob’s passing.

Visiting hours will be held at the Edward V Sullivan Funeral Home, 43 Winn St., BURLINGTON (Exit 34 off Rt. 128/95 Woburn side) on Thursday, Jan. 14 from 5-7 p.m.  A Mass of Christian Burial will be celebrated at St. Margaret Church in St. Veronica Parish, www.stveronicama.org, 111 Winn St., Burlington on Friday, Jan. 15 at 10 a.m.  Services will conclude with burial in Pine Haven Cemetery, BURLINGTON.   Memorials in Bob’s name may be made to People Helping People, P.O. Box 343, Burlington, MA 01803.  For directions, obituary, online guestbook, memorial video, and live stream of funeral mass see www.sullivanfuneralhome.net