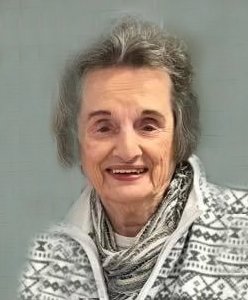 Private funeral services will be held at St. Mark’s Episcopal Church in Burlington. Family and friends are welcome to watch the service by going to St. Mark’s website/facebook page on Saturday, March 6 at 10 a.m. https://www.facebook.com/saintmarksburlington/live/

Barbara Ann (Phillips) Morgan passed away at her home on Sunday morning, February 28, 2021.  She was 90 years old.  Barbara was born and raised in Somerville, Massachusetts. She was the daughter of the late Ronald and Isobel Phillips.  Barbara was a 1948 graduate of Somerville High School.  She married her husband Robert at the age of 19 and moved to Burlington in 1955 where she would raise her family.

Barbara started working at the age of 13 at a local restaurant in Boston.  She worked with several employers including Pilgrim Bank, Raytheon, and The Management Center. At the age of 75 she took on the role of Companion working at Carlton Willard in Bedford.

Barbara was a strong and outgoing woman filled with love, compassion, and humor.  She had a quick wit about her and often shared quotes, sayings and poetry.

The Morgan home was filled with love, laughter, home cooked meals, and an open invitation for any and all family, friends and neighbors to visit.  Barbara raised her children in a wonderful neighborhood that helped create lifelong friendships.  She was a role model for her children, grandchildren and her great grandchildren teaching them the values of love, family, and faith.

Barbara especially enjoyed travelling with her family.  She toured Europe and had the opportunity to visit her mom’s hometown in Scotland. She also loved “Soaring” through Disney, one of her favorite destinations. Barbara also enjoyed traveling throughout New England.  For many years she made memories at her Lake Winnipesaukee condo entertaining family and friends.

Barbara was a longtime and active member of St. Mark’s Church in Burlington.   The members of the church were like a second family to her.   She loved being involved in bible study, fairs, suppers and volunteered whenever possible.

The perfect day for Barbara would be going shopping at Kohls, having lunch at the Chateau, and welcoming her family for a visit.    She will long be remembered for her quick wit, quotes and love of poetry.