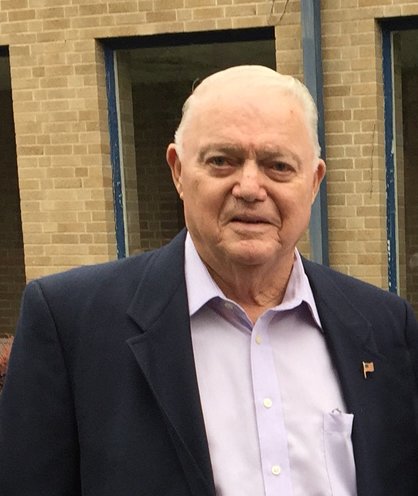 Charles F. Robinson, Jr. passed away at Massachusetts General Hospital surrounded by his family on Wednesday, March 31, 2021. The beloved husband of the late Laura (Goullaud) he was 84 years old.

Charlie was born in Medford. He was the son of the late Charles and Catherine Robinson.  Charlie was raised in Arlington and a 1954 graduate of Arlington High School.  After high school he served his country in the United States Army during the Korean War.  After returning from the war, he would literally marry the “girl next door” Laura Goullaud, who lived two doors down from his home.  They married in 1959 and moved to Burlington in 1963 where they would raise their five children and become active members of the community.

Charlie worked as a Sheet Metal Worker and a proud member of local 17 for over 63 years.  Charlie was a strong man who worked hard to provide for his family.   He worked on many different projects through the union including Burlington High School, Channel Four news station and the Stoneham Zoo to name a few.

When his children were young, he was very active in youth hockey. He coached his sons in youth hockey for many years and was very involved in many aspects of the hockey program.   He even made a full-size skating rink for his children in the back yard of their home on Holly St.   They had many great memories with backyard bbq’s and swimming in the above ground pool with neighbors, family and friends.   As a family the Robinson’s enjoyed camping with their trailer.  In 1969 they took their first camping trip to York Beach.  After 7 years the trailer went away when they found their forever summer home in York Beach.   It was, and still is, the gathering spot for the entire family.

Charlie and Laura had a wonderful life together.  During their retirement years Charlie and Laura lived in Bonita Springs, Florida, and enjoyed their summers at their home in York Beach.  They made many friendships at both locations.   The family is grateful for the wonderful friends including the close friendship of Denis Stewart.  Charlie was an avid golfer and was a member of the York Golf and Tennis Club as well as the Bonita Fairways Golf Club.

Charlie was a devoted to his five children. He instilled in them life lessons that stayed with them throughout their lives. He was so proud to see them grow into adulthood and raise families of their own.  Charlie doted on his grandchildren and great grandchildren.  They brought incredible joy, happiness and “fun” to his life.  Just looking at them or spending time with them would bring a smile to his face.

Charlie will be remembered for his quick wit, his great sense of humor and for his “words of wisdom” or as his children affectionately called them “Charlisms”!    Charlie leaves this world with no regrets.

Charlie was the beloved husband of the late Laura (Goullaud)   He was the loving father of Donna Connolly & her husband Jim of Nashua, NH, Charles & his wife Diana of Cape Neddick, ME, Marianne McKenna & her husband the late Robert of Billerica, William & his wife Amanda of Methuen and Laura Sullivan & her husband Kevin of Burlington.  Proud grandfather of James Connolly & his wife Alexandra; Michael, Catherine & Bryan Connolly; Siobhan Lopez & her husband Joseph; Kyle, Samantha, Liam & Zoe Robinson; Kaila, Thomas & Margaret Sullivan and Craig Paradiso.  Great grandfather of Raegan & Seamus Connolly and Sloane Lopez. Brother of the late Paul Robinson.  Also survived by many nieces and nephews and many in-laws.  A Mass of Christian Burial will be celebrated at St. Margaret Church in St. Veronica Parish, www.stveronicama.org, 111 Winn St., Burlington on Thursday, April 8 at 10 a.m.  Burial will be private.  In lieu of flowers memorials in Charles name may be made to Wounded Warrior Project, PO Box 758516, Topeka, Kansas 66675-8516  www.woundedwarriorproject.org