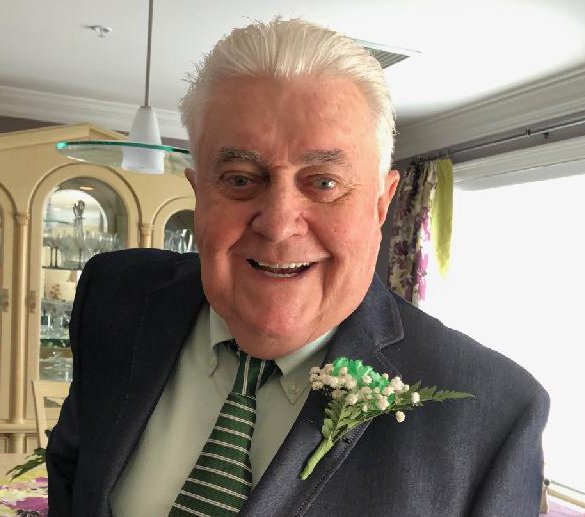 The LINK (above) will bring you to our facebook page (sign in is NOT required) to view the funeral mass.  A live-stream will begin a few minutes before the start of the funeral on Friday, April 9 at 10 AM

Eugene ‘Terry” McSweeney, a devoted family man and community member, passed away at his home on Monday, April 5, 2021 surrounded by his family. He was 85 years old.

Terry was born and raised in Everett, Mass. He was one of five children born to Irish immigrants, the late Bryan and Catherine McSweeney. He was a graduate of Cathedral High School and, at the age of 19, enlisted in the United States Army. He proudly served his country during the Korean War from 1954 – 1956. He was the recipient of the Good Conduct Medal, the National Defense Service Medal, and the Army of Occupational Medal.

At the center of Terry’s life was his family - there was nothing more important to him. Terry met his wife, Barbara, at work and married her at the age of 21. They settled in Burlington, Mass in 1964, where they raised their five children. Terry was an active member of the Burlington community, and his love for his town and deep commitment to his family, enticed him to bring his parents, sister, brother and their families to Burlington.

He was a genuine family man who was often referred to as the Patriarch. He never missed any of his children’s sporting events, dance recitals or important occasions in their lives. He was sought out by family members for his sage advice, comforting ear and a lending hand. Terry and his family enjoyed vacations to New Hampshire, Wingaersheek Beach in Gloucester, or simply being together at the family pool.

Terry had an incredible work ethic and tirelessly strived to provide for his family. He attended Lowell Tech at night on the GI Bill, studying Civil Engineering while working part-time at the Post Office and the local butcher. He graduated with an associate degree and worked as a Civil Engineer for the Commonwealth of Massachusetts for more than 40 years.  As his children got older, Terry knew he needed to support them through their college educations. He formed a business called TM Associates, a paving company located in Burlington, MA that he operated for more than 38 years; until he was 80. Additionally, not one to ever sit idle, during his retirement years, he worked as a Consultant for the town of Middleton.

Terry had a true passion for politics and serving the community in which he lived. He was, and still is, the longest-tenured member of the Burlington Board of Health, elected for more than 37 years, retiring in 2014.  He held a variety of roles on the Board and established many local civic programs still in existence today. Like St. Patrick’s Day, election day was a very important and treasured "holiday” for the McSweeney family.  Terry was very respected in Burlington politics and was often visited by many state politicians throughout the years looking for his support, including former Governors Michael Dukakis and Edward King, former Mayor Kevin White, and Former State Representative Joseph Kennedy.

Terry not only cared about his community, but equally cared for its citizens. If he heard someone needed assistance, he was right there for them, under the radar, helping.

Terry was a true Boston sports fan. He held season tickets to the Bruins for over two decades and attended games with his children, sharing the love of sports with them and passing that love onto his grandchildren. He attended the 2004 Super Bowl in Houston, Texas to watch his New England Patriots defeat the Carolina Panthers and the final World Series Game for the Boston Red Sox at Fenway Park in 2013. In addition to his passion for sports, Terry also competed for many years in the Drum and Bugle Corp.

After 38 blessed years of marriage, heartbreak struck the McSweeney family when Terry’s wife, Barbara, passed away in April 1995. Terry was fortunate to reconnect with a longtime friend, Micci Stamos, in 2002. Wed in 2017, they enjoyed traveling, spending time together and taking memorable trips to Marco Island.

Terry, with his larger-than-life personality, will always be remembered for his generous spirit, his eye for fashion and impeccable dress, the joy in which he lived his life, his devotion to Burlington and its community members, and – most importantly - the incredible family he built as they continue his legacy in their own lives.

Share Your Memory of
Terry
Upload Your Memory View All Memories
Be the first to upload a memory!