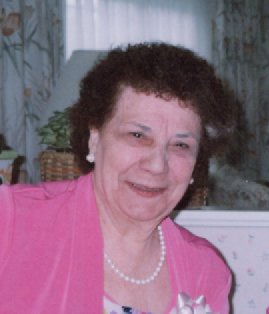 Mary Theresa (Russo) Verducci, a dedicated and loving wife, mother, sister, grandmother, and great grandmother passed away after an extended illness at her home of 55 years on Tuesday, April 6, 2021.  She was 95 years old.  Mary was born in Waltham.  She was one of five children born to Italian immigrants: Peter and Assunta Russo.  She grew up and was educated in Waltham.  She married her husband, Joseph D. Verducci, on June 20, 1948.  They lived their first 16 years together in Brighton where they had their 3 children.  Then in 1966, looking for a larger home with a piece of land for the children to play they moved to Burlington.  She had worked as an assembler at the Waltham Watch Factory until the birth of her first child.  Then, she took her new role as mother and homemaker.  Her home was filled with Italian traditions and values.  Her kitchen was the heart of her home.  She learned from her friends all the traditional and modern Italian gastronomy.  Hospitality and love were expressed through her food.  She welcomed all her guests and then would say “What can I get for you”.  Even if you were not hungry, “nothing” was never the correct answer.  She hosted Sunday dinners, holidays, summertime barbecues, and family celebrations at her home and everyone was welcomed. Her eggplant parmesan, homemade raviolis, gravy, and meatballs were some of her families and friends’ favorite dishes.   It was not uncommon for everyone to take part in a competitive game of bocce or SCAT after a meal.  It was never a duty but a delight to be a guest at Mary’s home.

Mary was a woman of exquisite style.  She never went out of her home without her hair and makeup perfectly done and being impeccably dressed.  She had the million-dollar look, but everything she purchased was a bargain and on sale.  She enjoyed going to Bingo with her girlfriends and being a part of a bowling league.  And in her later years when her mobility was declining, she kept her mind sharp by reading, crosswords, crocheting and watching and guessing the answers on her favorite television shows; “Wheel of Fortune”, “Jeopardy”, and “Family Feud”.  Reaching the age of 95 had many health challenges and impediments that she managed through the loving support of her children, especially her daughter, Donna, who lived with her and was her caregiver.  They had a very special bond.  Her family will be eternally grateful to the staff of the Beth Israel Lahey Health hospice team that supported them in caring for their mother and grandmother in her final months and fulfilling her final wishes to pass in her own home with her family at her side.

A very special thank you to Nancy and Ruth for the ultimate compassion and kindness they showed while caring for Mary.  They brightened many a tough day.

The family would also like to thank Faith, Sally, and the staff at Immaculate Homecare Services, especially Cathy and Emily, for the wonderful care they provided to Mary.

Mary shared 59 wonderful years of marriage with her late husband Joseph D. Verducci, (aka Joe Bardi), who passed away in 2007.  She was the loving and supportive mother of Jean Niestepski of Wilmington, Donna Verducci of Burlington, and Joseph Verducci of Billerica.  She was the mother-in-law of Michael Niestepski.  She was the proud grandmother of Jeffrey Michaels & his wife Kerrin and Michelle Niestepski & her fiancée Brian Kaufman.  She was the adoring great grandmother of Oliver Michaels.  She was predeceased by her siblings Carmella Marcantonio, Jean Corr, Red Russo, and Jimmy Russo.  She is survived by her in-laws Charles Mangine of Needham and Phyllis Verducci of Palm Beach, Florida.  She was also survived by many special loving nieces and nephews.

The family will be having a private service and would like to thank all their relatives and friends for their kind and loving thoughts and prayers.  Expressions of sympathy may be made by memorial contributions in loving memory of Mary Verducci and can be sent to Beth Israel Lahey Health for Home Hospice, care of Philanthropy, 41 Mall Road, Burlington, MA 01805 or online by going to www.support.laheyhealth.org/homehealthgive.