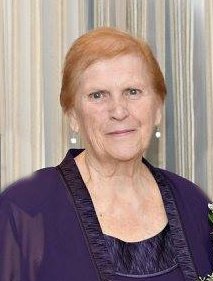 Get Directions
Friday
14
May

Get Directions
Friday
14
May

Peg was born in East Boston. She was one of five children born to Canadian Immigrants the late Anthony and Rose Lane. Peg was raised and educated in East Boston and a graduate of East Boston High School. She went on to receive her nursing degree from Chelsea Memorial Hospital Nursing School. Peg married her husband Jim on September 5, 1959 and they lived briefly in Chelsea. They moved to Burlington in 1966 where they would raise their seven children. With her caring and nurturing manner being a nurse was the perfect career for Peg. She worked part-time nights and weekends at the Winthrop House, Aberjona and Pine Knoll Nursing Homes; however, her primary role was that of wife and mother. Peg could do it all. She never missed any of her children’s or grandchildren’s sporting events, dance recitals or any momentous occasion in their lives. She made sure there was always a homecooked meal on the table each evening for Jim and her children. Family vacations were always a special event for the Browne family often sharing their vacations with Peg’s sisters and their children. Peg and Jim would pile all the children up in the station wagon and take trips to Kingston Lake in New Hampshire or a day trip to Beaver Lake in Derry, NH. Peg would always say the more family around the happier she would be. Peg also found time for herself. She enjoyed knitting, crocheting, doing crossword puzzles or having a fun game of cards with her sisters and their husbands.

Peg’s love for her family has always been an enduring force. She had a wonderful 60 year marriage to Jim. They weren’t just husband and wife they were the best of friends. In the eyes of her children and grandchildren there was no better mother or grandmother than Peg. She was the matriarch of her family and extended family. When you looked into Peg’s eyes you knew that her love was the purest love you could find. Peg could divide her love among all her children, grandchildren and great grandchildren and make each of them feel like they were the most special to her. To sum her up, her proudest titles were “Mom and Nana.”

A Mass of Christian Burial will be held at St. Margaret’s Church in St. Veronica Parish, www.stveronicama.org, 111 Winn St., Burlington on Friday, May 14th at 10 a.m. Services will conclude with burial in Pine Haven Cemetery, Burlington. Visiting hours will be held at the Edward V Sullivan Funeral Home, 43 Winn St., Burlington on Thursday, May 13th from 5-8 p.m. Memorials in Peg’s name may be made to Autistic Self Advocacy Network, www.autisticadvocacy.org