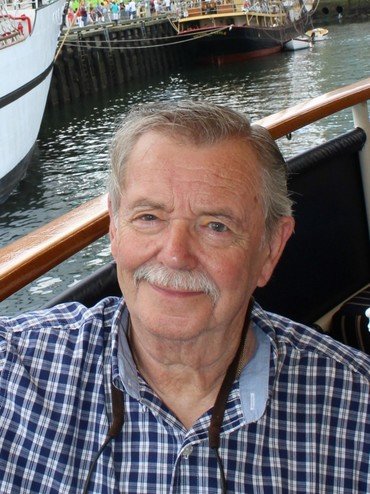 Get Directions
Tuesday
18
May

Get Directions
Tuesday
18
May

Click on this link to view the funeral mass.

The LINK (above) will bring you to our facebook page (sign in is NOT required) to view the funeral mass.  A live-stream will begin a few minutes before the start of the funeral.

Thomas E. Murphy, a loving husband, father, and grandfather, passed away from a courageous battle with cancer on May 7, 2021 at his home surrounded by his family.  He was 85 years old.  Growing up in Roxbury, MA , Tom was the only child of Thomas M. and Harriet Murphy.  He graduated from the Boston School of Commerce, class of 1953, and later lived in Weymouth, Everett, and Malden before settling in Burlington in 1994.  Tom proudly served his country in the Army from 1957 to 1959 as a PFC.  He spent much of his service time stationed in Germany as a member of the HQ Battery 2nd MSL Battalion of the 56th Air Defense Artillery.  He was the recipient of the Good Conduct Medal. After returning from his military service, he had worked as a distribution manager for several companies including Pioneer Mutual, Letters Unlimited, and Vocational Adjustment Center.

Tom was a man who was devoted to his beloved wife Maria and was a loving and caring father to his daughters, Christine and Denise.  He was proud to walk them down the aisle on their wedding days and happy to welcome two great sons-in-law into the family.  Tom could not be more joyful than when he became a grandfather.  So much so, that he and his wife Maria followed their daughter, Christine, to Burlington and purchased a home just down the street from her and her family.  Over the next several years, he was always there to support his grandchildren in their many activities and educational endeavors. His three grandchildren were his pride and joy. There were many special family vacations spent in Kennebunkport, Maine and on the shores of Cape Cod.  Tom had a passion for automobiles.  He was always washing, waxing, and studying the styles for his next vehicle purchase.  He always had CNN on the TV to keep him informed of the news and issues around the world and enjoyed discussing politics and current events.  He was an avid reader of mystery novels and often finished them within a day or two. Tom was also a true Boston sports fan, often discussing the Celtics, Patriots, Red Sox, and Bruins with his grandsons.  He was a longtime parishioner of St. Margaret’s Church.  He also enjoyed walking the Burlington Mall each morning with friends.   He will be lovingly remembered by his family and friends.

Tom was the beloved husband of 61 years of Maria (Sinagra) Murphy.  He was the loving father of Christine Gavin and her husband John of Burlington and Denise Murphy and her husband Patrick Smith of Salem, MA. He was the proud grandfather of Ryan, Kerri, and Sean Gavin of Burlington. He is survived by many nieces and nephews. Visiting hours will be held at the Edward V. Sullivan Funeral Home, 43 Winn St., Burlington on Monday, May 17 from 4-7 p.m.

Funeral from the Sullivan Funeral Home on Tuesday, May 18 at 9 a.m. Followed by a Mass of Christian Burial in St. Margaret’s Church in St. Veronica Parish, www.stveronicama.org, 111 Winn St., Burlington at 10 a.m. Services will conclude with a burial at Holy Cross Cemetery, Malden.  Memorials in Tom’s name may be made to the Lustgarten Foundation for Pancreatic Research, 415 Crossways Park Dr., Suite D, Woodbury, NY 11797, www.lustgarten.org.

Tom Murphy was the only child of Harriet and Tut, a loving husband to Maria Sinagra Murphy for 61 years – can you believe that? – the proud father of Christine and Denise and the beloved grandfather of Ryan, Kerri and Sean.

The third floor apartment on 35 George Street in Everett was home to Tom, Marie, Christine and Denise for many years – a place where they celebrated many fun times and holidays with Frank, Lillian, Michael and Frankie Campagna who lived on the first floor. Oftentimes, all would meet in the middle to join Nana and Louise on the second floor where food, stories and laughter were shared. There were also many fun summer vacations spent on Newfound Lake in New Hampshire with the Campagnas. And then with family on the beaches of Kennebunk, Maine.

Tom loved to read. He was a regular at the Burlington Used Book Store, who preferred a mystery or crime story, and could always solve the mystery in a novel halfway through it.

He was a great storyteller – impressing his grandchildren – with his many adventures growing up in Roxbury and South Weymouth but especially his military service in Germany.

He loved his automobiles – washing and waxing his and Marie’s on a regular basis. Several times over the years, he passed his car along to a grandchild. Tom was extremely well organized keeping meticulous maintenance records for his cars, and every tool he owns has its unique place in the garage or shed.

He loved to walk, and he did it daily, around the Burlington Mall. He made friends easily – especially when he walked the Mall. During the many laps they did, he and his walking buddies would talk about sports and the news he gathered from watching CNN faithfully every day – avoiding any political discussions so that all would remain friends.

The term that best describes Tom is: You were there…

Tom - You were there to help Marie with Nana – first in Everett over too many years to count, and then at the Nursing Home.

You were there to help Chris and me with home repairs and provide whatever tool was needed to get the job done.

Tom - You were there to paint whatever room or rooms Denise and Patrick needed painted – sometimes more than once if the color wasn’t quite right.

You were there to see Ryan’s interception at St. John’s Prep.

You were there for your princess Kerri when she called you in a panic from the Burlington High School parking lot where she was involved in a fender bender.

You were there to see Sean’s first goal at Marist.

And you were there to help Ryan, Kerri and Sean move into a dorm at BC, the Love Shack in Providence and the hockey house in Poughkeepsie.

His grandchildren meant to the world to him, proudly displaying their colleges’ decals on the back window of his car. His wardrobe included a variety of hats, sweatshirts and jackets – each displaying either an Eagle, a Friar or a Fox.  He became the most well-known “Grampy” on each of the college campuses, as he was often instructed by Grammy to deliver food, clothing, money or whatever else they needed. Tom was an Uber long before it became a big business.

Tom – You fought a courageous battle with pancreatic cancer for three and a half years. Please know that you are already missed. You will always be loved. And you will never be forgotten.