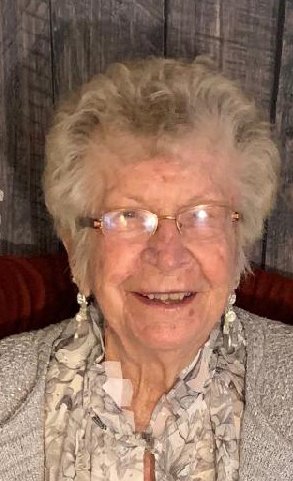 licking on the link (above) will bring you to our facebook page (sign-in is NOT required).  A live-stream of the funeral service will begin shortly before 10am

Barbara was born and raised in Gloucester. She was the daughter of the late Richad Bastion and Edna Mitchell.  Barbara was a 1946 graduate of Gloucester High School.   It was working at a local convenience store that she would meet her future husband Eldridge “Brownie” Brown.  Barbara’s greatest dream was to have a family and make sure that the family stayed close throughout their lives.  Her dream came true with her marriage to Eldridge on June 6 1948 and the birth of her three children, 8 grandchildren and 14 great grandchildren.

As a family, when the children were younger, they enjoyed vacationing in Maine.  She was a hands-on-mom who was always there for her children.  She taught them, by example, wonderful family values.   Barbara worked in the cafeteria of the Burlington High School for over 30 years.  It was the perfect job for Barbara because it had mother’s hours and she could be home when her three children came home from school.

Barbara was a supportive wife to her husband Brownie. Brownie was very involved in the Knights of Columbus and Barbara in the Catholic Morgears.  She was by his side for all the charitable work he did for the K of C.  They enjoyed dancing together on Saturday nights whether it was at the K of C dance or some other function.  They continued dancing well into their 70’s.   Barbara and Brownie thoroughly enjoyed their retirement years.  They moved to an over 55 community in Bedford New Hampshire where they made many friends.  They spent their winters in Englewood Florida and enjoyed spending their summers on their boat “Sunny B’s” which they kept at the Danversport Yacht Club.   They even took a memorable trip cross-country by van and traveled extensively. Barbara enjoyed oil painting and her children were all blessed to have one of paintings displayed in their homes.

Barbara loved to dress to perfection. She kept up with the latest styles and trends.  Barbara was anxiously awaiting the birth of her 15th great grandchild (Kayden) this fall and had attended the baby shower just two weeks prior to her passing.  Barbara will be remembered as a kind, quiet, soft spoken woman who lived her dream of raising a close-knit family!