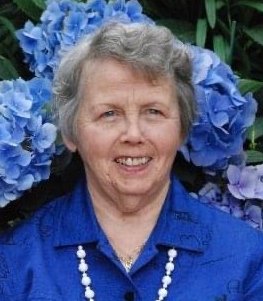 Pauline J. (Hebert) Hayes, a woman devoted to her family and her faith, passed away at U Mass Medical Center in Worcester on Thursday morning, June 10, 2021.  The beloved wife of the late William Patrick Hayes, she was 89 years old.

Pauline was born in the family home in Newport, Vermont.  She was one of 10 children born to Canadian Immigrants the late William and Marie Hebert.    Pauline’s family eventually moved to Leominster where she was raised and educated.   Pauline raised her six children in Leominster. She was a strong woman who made many sacrifices for her children and made sure they did not want for anything.  She would meet the love of her life, William Patrick Hayes, at ballroom dancing in Burlington.    They married and moved to Burlington in 1983.  Pauline had a wonderful life with William, and they had 19 years of marriage until his death in 2004.

Pauline led a full and active life living in Burlington and made many friendships.  She was a member of the Red Hats, TOPS and participated in many of the activities at the Burlington Council on Aging.   She enjoyed ball room dancing and leading the annual Burlington Rosary Rally.   Pauline’s Catholic faith was an extremely important to her.  She was a longtime parishioner of both St. Leo’s Catholic Church in Leominster and St. Margaret’s Church in Burlington and enjoyed singing in their choir.    Pauline will be remembered for her strength, her outgoing personality, her love of family and faith in God.

Pauline was the beloved wife of the late William P Hayes and a loving mother to Maureen Orn of Sutton, Susan Ciccolini of Arizona, Paul Andersen of West Boylston, Michael Andersen of North Carolina, William Andersen of Florida, and David Andersen of Fitchburg.  She was the stepmother of Richard Hayes of Maine, Gary Hayes of Maine, Daniel Hayes of Danvers, Margaret Joyce of Beverly, and the late William Hayes Jr.  She was the sister of Paul Hebert, Therese Tobin & Laurette Loiselle all of Leominster and the late Irene Rajotte, Roger, Henry, Jeanette, Raymond, and Alphonse Herbert. Pauline is also survived by 27 grandchildren, 28 great grandchildren and one great great grandchild.

Visiting hours will be held at the Edward V Sullivan Funeral Home, 43 Winn St., BURLINGTON on Sunday, June 13 from 3-5 p.m.  Funeral from the Funeral Home on Monday, June 14 at 9 a.m. Followed by a Mass of Christian Burial in St. Margaret’s Church in St. Veronica’s Parish www.stveronicama.org ,111 Winn St., Burlington at 10 a.m.  Services will conclude with burial in Pine Ridge Cemetery, Chelmsford.  In lieu of flowers memorials in Pauline’s name may be made to St. Jude Children’s Research Hospital, 501 St. Jude Place, Memphis, TN 38105.

Share Your Memory of
Pauline
Upload Your Memory View All Memories
Be the first to upload a memory!