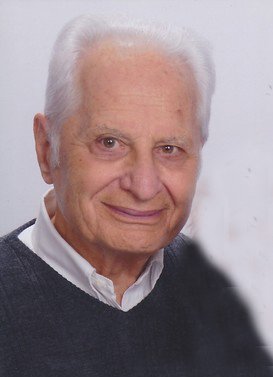 Obituary of Peter A Bandouveres

Peter A Bandouveres passed away at his home on Tuesday evening, June 22, 2021. The beloved husband of Magdalene Bandouveres, he was 97 years old.

Peter was born in Ipswich.   He was the son of Greek immigrants the late Apostolas & Constantina Bandouveres.    He was raised in Cambridge and a graduate of Rindge Technical High School.  He served his country in the Army Airforce during World War II and was the recipient of the Good Conduct Medal.  After the service, Peter went on to further his education at Boston University where he earned his bachelor’s degree.

Peter worked as an Aircraft Mechanic at Hanscom Air Force Base for 17 years.  He then went to work as a Computer Systems Analyst at GTE for 16 years retiring in 1990.    Peter and Maddie married in 1964.  They lived for a few years in Arlington before moving to Burlington where they would raise their 2 children.

Peter was a member of the Burlington Lions Club and was past Treasurer.  He was also a longtime member of the Annunciation of the Virgin Mary Gerek Orthodox Church in Woburn.  Peter was a bit of a history and geography buff. He had a great memory and gathered facts from all different periods of times.  A family vacation wouldn’t be a family vacation without Peter taking a day for himself to visit the local museum or historical attraction.  Peter enjoyed his retirement years.  He was a member of the “ROMEO” aka Retired Old Men Eating Out!  Peter and his friends would meet every other week at Annunciation Church and go out to lunch together.   Vacations for Peter and Maddie during their retirement years were stays Florida and visits to Wisconsin, Washington, California, and South Carolina to visit their children, Stephanie and Jason, and their grandchildren Jack, Dean, Natalia & Grace.  Peter will be remembered as an easy going and quiet man whose greatest love was for his wife, children, and grandchildren.

Peter was the beloved husband of Magdalene (Geotis).  Loving father of Stephanie Bandouveres & her husband William Dodge of Germantown, WI and Jason Bandouveres & his late wife Nan of Edmonds, WA.  Proud grandfather of Jack, Dean, Natalia & Grace.  Brother of Maria Bandouveres of Arlington and the late George & James Bandouveres.  Also survived by many nieces, nephews, great nieces, and great nephews.  Visiting hours will be held at the Edward V Sullivan Funeral Home, 43 Winn St., Burlington on Friday, June 25 from 4-7 p.m.  Funeral Services will be held at the Annunciation of the Virgin Mary Greek Orthodox Church, 70 Montvale Ave., Woburn www.annunciationwoburn.org on Saturday, June 26 at 10 a.m.  Burial to follow in Pine Haven Cemetery, Burlington.  In lieu of flowers memorials in Peter’s name may be made to the Annunciation of the Virigina Mary Greek Orthodox Church.