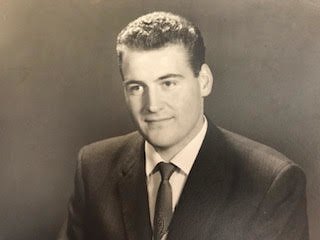 Please share a memory of Giovanni to include in a keepsake book for family and friends.
View Tribute Book

Giovanni Bonugli, passed away at the Lahey Hospital and Medical Center, following a brief illness on Friday afternoon, July 9, 2021 shortly after the passing of his beloved wife, the late Rita M. (Bouchard) Bonugli (deceased June 21, 2021).

Born and raised in Mons, Belgium, Giovanni was the only son of the late Guido and Adelaide Bonugli. Surviving World War II, the family eventually moved back to Italy where he attended high school. He then returned to Mons, Belgium to attend Institut Saint-Luc, before moving to Montreal, Canada. It was while living in Montreal that he met his future wife, Rita Bouchard. They married on April 23, 1960. It had always been Giovanni’s dream to move to the United States for a better life for him and his family, so on their wedding night, Giovanni and Rita moved to Cambridge, MA. They finally settled in Burlington in 1968, where he raised all his 3 children. He worked for Merrill Daniel’s Printing in Everett as a Graphic Artist for over 25 years.

Giovanni had many interests and hobbies. He loved cycling and always looked forward to watching the Tour De France every summer. In his youth, he rode his bike from Belgium to France.  To prove that he rode his bike to France, Giovanni sent a postcard from France to his father in Belgium. Giovanni was also a car enthusiast and owned a 1976 Camaro along with other two-door sports cars. The sweet memories of father and son’s car rides in his father’s proud family car and many family road trips will be forever remembered and cherished by his son. He was also a talented photographer, a profession that led him to meeting his future wife, Rita. Giovanni also enjoyed art, with his passion in sketching art. His artistic talents ran in the Bonugli family, following the footstep of his late father, a sculptor who did many historic sculptures in Massachusetts and religious and gnome sculptures in Belgium. Giovanni’s artworks have been greatly appreciated by his children and proudly displayed at his children’s homes. They will be cherished for generations to come after him. His claim to fame was that he attended art school with Carol Burnett! Giovanni was also an inquisitive person and enjoyed DNA and ancestry research. His son remembered vividly all the fascinating discussions and interest he had on his ancestral history. With his European childhood, he was always very happy when he received news about his relatives back in his hometown in Barga, Italy. Giovanni’s story about his life and relatives back in Italy will be greatly missed.

Giovanni never missed a soccer match that involved Belgium or Italy. With his European background it was no wonder that Giovanni could speak 5 languages.

Giovanni was a family man. A kind and supportive father, he made sure the children were equipped with the best education and were never short of any moral and financial support to pursue any activities outside of schools. He also allowed his children to make their own life decisions to pursue happiness or adventure.  He was a devoted husband who truly dedicated his life to his wife Rita. Giovanni took wonderful care of her for the past 20 years during the recovery of her double ruptured brain aneurysm in 2002. His love brought her back and they had a few amazing years after her recovery, until she was battling with Alzheimer’s disease. He never lost hope that she might one day be cured. His dog Pipa was his best friend and helped him throughout the years of caregiving for Rita. Giovanni will be remembered as a strong, very independent but quiet man who always put the needs of his family above his own.

Giovanni was the beloved husband of the late Rita (Bouchard).  He was the loving father to his son Richard Bonugli and daughter in law, daughter Michelle Bonugli Tucci & her husband Jim Tucci, daughter Nicole Bonugli Richardson & her husband Brian Richardson, and the proud grandfather of 2 grandchildren and 3 dogs, Pipa, Bella, and Molson.

or to the American Thyroid Foundation, https://www.thyroid.org/

We all hear people say "Our parents were the best parents in the world.".

Richard, Nicole, and I were very lucky to have had the parents we did.
Our father, Giovanni, was the most amazing, kind, courageous, ethical, giving, and intelligent person we've  known.
Our mother, Rita, was hard working, frugal, and giving - and a social butterfly.

Our father was born in Belgium to Italian parents.  He lived in Belgium and Italy before immigrating to the
United States for freedom, opportunity, and a better place to raise a family.
And for a place where it doesn't rain 70% of the time.

He first went to Montreal, Canada where he met our mother, Rita.  She supported his dream.
They got married in Canada and immigrated to the United States on their wedding night.

I really didn't understand the depth of why our father loved this phrase so much until
my husband I have lived in Belgium.  With all taxes, restrictions, rules,
we Americans don't realize how much freedom and opportunity we have here in the United States.

Our father took that opportunity and worked hard and succeeded.
He taught us to do the same.   He did whatever he could to provide us with
great childhoods and to learn, grow and succeed as adults.

From helping my brother design and build his Boy Scouts Pinewood Derby car that predominantly won each year,
making my brother lead hockey pucks to help him with his slapshot,
driving me to my violin lessons and orchestra rehearsals (granted he did just drop me off in the middle of Boston
with 5 bucks for lunch), getting my skates sharpened at the best hockey shop while I was in college,  teaching Nicole
to be a handywoman -  to fix something herself, before paying for someone else to do it
(like changing her own oil and filter in her car and motorcycle, fixing the lawn mower,  changing the
kitchen and bathroom faucets, and replacing a toilet). So if anyone needs any handy work done, contact Nicole.

Never once did our father say "No" - but then again, we never asked him for anything unreasonable.
Our mother would say "No.."...sometimes for good reasons, but sometimes for reasons that didn't make any sense.

Our mother would shop sales and use coupons at the supermarket and at Filene's Basement where she worked for 19 years,
and would make homemade fresh food from scratch.  She was an amazing cook.  She would make homemade raviolis,
egg rolls, lasagna, pot roasts and bake cakes, cookies, pies.  There was nothing she couldn't  make or do.
She loved to share her food with people and entertain them with dinner parties.
She, with our father's mother, would always make Sunday Dinner.   You could smell the dinner outside all the way
down on Jefferson Ave.

After raising us and working all his life, he devoted the last 20 years of his life, his retirement/golden years caring for his wife
after our mother had her double ruptured brain aneurysm and developed alzheimer's and dementia.
He refused to place her in a nursing home.  His beloved Pipa kept him going.

Our parents weren't rich, but they earned every penny they had.
They would do what they could to make us all happy and have a great life with lots of memories.
Our father couldn't afford to pay for airfare for the family to go to Florida and stay in hotels and rent a car,
so he drove us down to Florida and we camped.

And we had great memories - stopping at Stuckeys for pecan rolls,  orange picking, going to amusement parks,
going to Daytona beach - where my father would make a sand statue of a naked woman lying on the beach.
And the chocolate and candy stocking stuffers our father would covertly place in our stockings each night in December,
leading up to Christmas.  Nicole told her classmates that Santa came to the Bonugli household every night in December to
bring us chocolate.

Our mother had this habit of eating during the night.  And she sure loved sweets.
One morning our father got up and went to the bathroom.   He looked in the mirror and thought he had been stabbed
in the middle of the night.  Only then did he realize that he had chocolate all over his head and face.
We could hear him saying "It's EVEN in my ears!".  Oh My ...the visual...
We can only wonder and imagine HOW the chocolate got all over our father?

I brought some chocolate from Belgium to each and every one of you in memory of our parents.
Please feel free to eat it in bed!

Share Your Memory of
Giovanni
Upload Your Memory View All Memories
Be the first to upload a memory!
Share A Memory