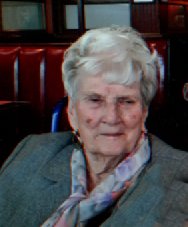 Mary was born, raised, and educated in Chelsea.  She was one of three children born to the late Edward and Theresa Nelson.   Mary would meet her future husband Edward while attending Chelsea High School.  It was love at first sight for Edward and they became high school sweethearts.  They married on September 6, 1947, after Edward completed his tour of duty in the Navy during World War II.  They stayed in their hometown of Chelsea, living in the home where Mary was born.

Mary was a devoted wife and homemaker while her children were young.  As a young girl, Mary, her parents, and her siblings enjoyed spending summers in Wolfeboro, New Hampshire.   After their marriage, Mary and Edward continued this tradition making wonderful memories with their family in Wolfeboro.    Mary and Edward had a wonderful 66 years of marriage and were devoted to each other.  Mary had a caring and nurturing nature about her and when her daughter Mariellen developed some health challenges, Mary and Edward didn’t hesitate to sell their home in Chelsea and move to Lynnfield to support Mariellen and her daughter Allison.

At the age of 55 Mary went to work as a Secretary at Stone and Webster in Boston.  She loved her job and enjoyed working in the city.  Her lunch hours were spent shopping for bargains at Filenes Basement and other local shops in downtown Boston.     She retired at 72.  At the age of 90 Mary moved to New Horizons in Woburn. She loved living at New Horizons.  She participated in all their activities and made many wonderful friendships there.  Even into her 90’s, while living at New Horizons and the Woburn Nursing Center, Mary maintained her flair for fashion and always looked and dressed impeccably.   Mary will be remembered how she embraced life, loved her family and she leaves a legacy that spans 98 years!

Mary was the beloved wife of the late Edward G. McFayden.  She was the loving mother of Janet Ruggiero & her husband Louis of Woburn, Edward & his wife Bozena of Ipswich, and the late Mariellen Mulligan.  Proud grandmother of Janeen Bono & her husband Gene, Stephanie, Melissa & Shannon McFayden, and Allison Mulligan.  Great grandmother of Gabrielle & Tyler Bono.  Sister of Roy Nelson & his late wife Alta of Topsfield and the late Edward Nelson & his late wife Katherine.   Sister-in-law of James McFadyen & his wife Lil of Revere.   Loving aunt to many nieces and nephews.  Visiting hours will be held at the Edward V Sullivan Funeral Home, 43 Winn St., Burlington on Wednesday, July 21 from 8:30 a.m. – 9:30 a.m. followed by a Mass of Christian Burial in St. Malachy Church at St. Veronica Parish, www.stveronicama.org, 99 Bedford St., Burlington at 10 a.m.  Burial to follow in Holy Cross Cemetery, Malden.  In lieu of flowers memorials in Mary’s name may be made to Multiple Sclerosis Society, Greater New England Chapter, 101A First Ave., Waltham, MA 02451  www.nationalmssociety.org/Chapters/MAM