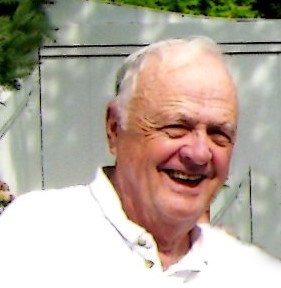 Armand F. Lauzon, Sr., 88, beloved husband of the late Carolyn Marie (Marsh), passed away at Windsor Place of Wilmington on Sunday morning, July 25, 2021. Armand, son of the late Alfred and Annette Lauzon, was born and raised in Lynn. After graduating from St. Jean Baptiste French Catholic High School, he enrolled in the prestigious General Electric Apprenticeship Program. His successful career at GE spanned more than 42 years where he eventually retired his position as Plant Manager. In 1954, during his time as an apprentice, Armand met his future wife and love of his life Carolyn through her brother-in-law who also worked at GE. They married on June 11, 1955 and had four children, Armand F. Jr. & his wife Denise of Manchester, James & his wife Valerie of Avon, CT. Julie Mahoney & her husband Rick of Billerica and Scott & his wife Andrea of Westford. In 1967, Armand’s job transferred him to Albuquerque, New Mexico where the family lived until moving back to the East Coast in 1973 where they settled in Burlington, MA.  Despite their distance in miles, Armand remained very close to his sister Connie who resides in Kentucky. The two families have continued to maintain a strong bound throughout the years.

Armand was a talented craftsman and enjoyed building decks, sheds, doghouses as well as improving his children’s homes with minor and major renovations. Armand loved music and would never pass up on an opportunity to play a piano or drum set wherever he might come across one. Despite all his hobbies, his ten grandchildren were his top priority. He was a proud grandfather of Armand F. Lauzon III, Cecile Cyr, MacKenzie “Mack”, Benjamin, Elizabeth, James, Nicholas & Ryan Lauzon and Allyson & Brianna Mahoney. They adored him as well.  His “special” frappes, Fourth of July celebrations, and his scratch tickets in the Christmas stockings are just a few of their special memories.

In 2000, Armand and Carolyn moved to Billerica to live with their daughter Julie, husband Rick, and granddaughters Ally and Brianna. Stelios, a local diner, became a favorite place for Armand’s breakfast where he quickly bonded with staff and “regulars.”

In 2020, Armand moved to Windsor Place where he immersed himself in activities and new friendships.

He will always be remembered for his larger-than-life personality, his loud and infectious laugh, and his deep love of family.

A Mass of Christian Burial will be held in St. Margaret’s Church at St. Veronica Parish, www.stveronicama.org, 111 Winn St., Burlington on Friday, July 30th at 10am.  Burial to follow in Fox Hill Cemetery, Billerica.  Relatives & friends respectfully invited to attend.   In lieu of flowers, memorials in Armand’s name may be made to the Dana Farber Cancer Institute – Jimmy Fund, PO Box 849168, Boston, MA 02284-9168 www.jimmyfund.org

Share Your Memory of
Armand
Upload Your Memory View All Memories
Be the first to upload a memory!
Share A Memory