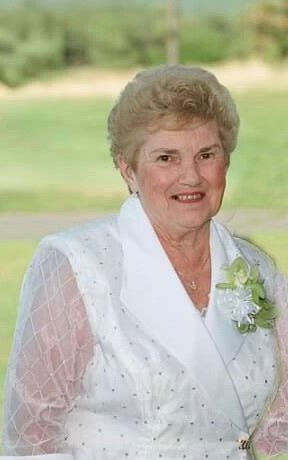 Obituary of Catherine A Gasper

Catherine A. Gasper, a kind and loving caregiver, passed away peacefully on Wednesday morning, July 28, 2021, at the age of 94.  Catherine was born in Arlington and grew up in the family homestead on Webster Street.  She was a graduate of Saint Agnes High School.  Catherine was an exceptional figure skater and her dream as a youth was to join the Ice Capades, which came close to coming true.  Despite not becoming a professional skater, she continued skating throughout her life and loved sharing her passion with her children at the various skating rinks and ponds in the Arlington area.  Catherine met her future husband at a Friday night dance held at the Arlington Town Hall.  They were married in 1947 and shared a wonderful life together for 68 years.  They lived in East Arlington for the first part of their marriage.  They then purchased their first home in Woburn in 1968 and eventually settled in Burlington in 1975.  Catherine worked as an assembler at Polaroid until becoming a mother.  She was a woman of strength, independence, and kindness.  Much of her time as a mother was spent caring for two of her children who were born with disabilities.  She created a warm and loving home for her family.  She always seemed to be in a state of perpetual motion, and she truly had a house that was so clean you could eat off the floor.  She was the special person that family members, friends, and neighbors called when they had an ill family member and needed guidance, encouragement, or a helping hand.  When her son John and daughter Elaine passed, Catherine knew that her role in life was to help care for others.  So, she went to work at the Symmes Hospital in Arlington where she was a ward secretary for 20 years until she retired at the age of 66.  Her thoughtfulness could be seen in simple acts like creating a special recipe for brownies that her husband, who didn’t like chocolate, could eat.  They became known as “Nanny Brownies” and were a favorite of her husband, children, and grandchildren.  She loved going to her grandchildren’s events, activities, and sports or just being surrounded by her many grandchildren and great grandchildren.  In her later years, she used word searches, computer games, and game shows on television to keep her memory sharp.  She was that stereotypical strong Irish woman who was a rock to her family, a source of strength in hard times, and filled with love and kindness to others.

Visiting hours will be held at the Edward V. Sullivan Funeral Home, 43 Winn Street, Burlington on Sunday, August 1 from 3 to 6pm. Funeral from the Sullivan Funeral Home on Monday, August 2 at 9am. Followed by a Mass of Christian Burial at St. Margaret Church in St. Veronica Parish, 111 Winn St., Burlington, www.stveronicama.org, at 10am. Services will conclude with a burial in Mt. Pleasant Cemetery in Arlington.  Memorials in Catherine’s name may be made to the Make A Wish Foundation, 133 Federal St 2nd floor, Boston, MA 02110 or http://www.wish.org/massri For directions, obituary, online guest book, and video tribute see www.sullivanfuneralhome.net

Share Your Memory of
Catherine
Upload Your Memory View All Memories
Be the first to upload a memory!
Share A Memory