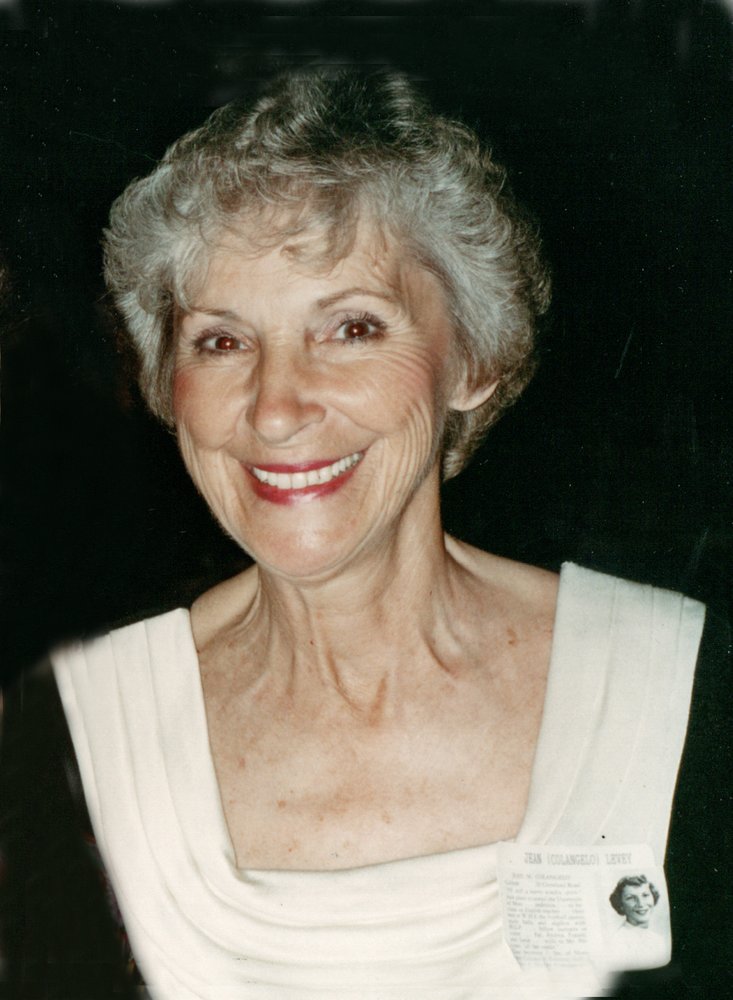 Jean Marie Levey passed away peacefully at her home surrounded by her family on Saturday night, July 31, 2021.  She was 85 years old.  Jean was born in Boston.  She was one of nine children born to August and Mary Colangelo.  She grew up in a modest, but a very active home in Waltham.  Being one of nine children had some challenges like privacy and bathroom time, but the benefits of family bond, cooperation, meaningful memories, and always knowing that her family was behind her far outweighed the negatives.  She married her husband John “Jack” Levey who was still in the Army on December 29, 1955.  They started their life together stationed in Germany where they spent time touring all around Europe and going to the World’s Fair which happened to be in Brussels.  While in Germany, her son, John, was born, before returning to the States.  Over the years she had made her home in Waltham, Burlington, Andover, Florida, and finally Plaistow, NH where she has resided since 1986.  She worked for 29 years for Malden Mills which became Polar Tek as the Administrative Assistant to the President, Aaron Feuerstein, who became so well respected and even famous for not firing any of his 3000 employees when the manufacturing plant burned to the ground. She then managed Colonial Gardens Apartments in Andover for a number of years before finally retiring at the age of 80.

Jean learned from a very early age the importance of family and how important it was to keep the family bond strong.  She a loving mother to her son John and a very proud grandmother.  Nothing made her happier than when she was spending time with her grandkids.  Holidays and traditions were very important to Jean.  Christmas Eve at the Alterisio’s home which was filled to the brim and the annual bocce tournaments where everyone played to win, Mother’s Day, and so many events where she cherished time spent with her Big Italian family.  The past year has been filled with health challenges for Jean, but her family rallied behind her so that she could remain home until her passing.  She will be missed, but never forgotten.

Jean was the beloved wife of 65 years of John E. “Jack” Levey. She was the loving mother of John A. Levey of Plaistow, NH. She was the proud grandmother of Krista Rose Levey of Reading, Gina Marie Dunn of Stoneham, and Michael Joseph Levey of Reading. She was the devoted sister of Patricia Alterisio & her husband John of Burlington, Francis Colangelo & his wife Sandra of Westborough, Robert Colangelo & his wife Diane of Waltham, Stephen Colangelo & his wife Barbara of Westford, Jacqui Murphy of Framingham, the late Marylou Colangelo, late Barbara Puntonio & her late husband Vincent, and the late Sandra Cote & her surviving husband Stephen Cote of Atkinson, NH.  She was also survived by many nieces, nephews, and great nieces and nephews.

Visiting hours will be held at the Edward V. Sullivan Funeral Home, 43 Winn St., Burlington, MA on Thursday, August 5 from 4-7pm. Funeral from the Sullivan Funeral Home on Friday, August 6 at 9am, followed by a Mass of Christian Burial at St. Malachy Church in St. Veronica Parish, www.stveronicama.org, 99 Bedford St., Burlington at 10am. Services will conclude with a burial in Pine Haven Cemetery, Burlington.  Memorials in Jean’s name may be made to the SAC Charities, c/o John Alterisio, 2 Pleasant Street, Burlington, MA. 01803.