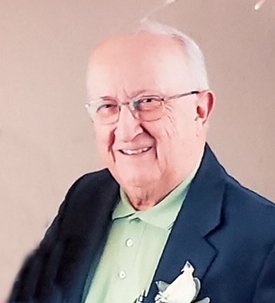 Robert Myrick Kelly, a longtime Burlington resident, passed away unexpectedly at his home on August 1, 2021.  The beloved husband of the late Margaret “Peg” Kelly, Bob was 88 years old.

Bob was born in Cambridge.  He was the son of the late Robert and Esther Kelly.  His family lived in North Cambridge until 1949 when they moved to Locust Street in Burlington.  Bob was a 1952 graduate of Burlington High School.  He would meet his future wife Peg through her mom who worked with Bob at S. S. Pierce. They married on June 14, 1958, and settled in Burlington where they would raise their eight children and become an integral part of the community and their church.

Bob worked as a Mechanical Engineer and Product Manager. He worked at Bell & Howell Communications, Raytheon, Oceanographic in Waltham, Transonic in Burlington, Kel Corp in Burlington, and Dogwatch in Natick.  He also had his own Skate Sharping Business, “ Kell Sharp”, that he did out of his home.  Bob loved sports and was very athletic throughout his life.  He played baseball in high school, belonged to an adult basketball team and played in a number of “no check’ hockey teams well into his 50’s.

Bob, Peg, and their children enjoyed summer vacations at York Beach and Cape Cod.   During their retirement years they enjoyed taking an occasional day trip to Gloucester or York Beach.   Bob and Peg were fixtures at St. Margret’s Church for many years and helped build the foundation of the church during its early years.    Bob taught Religious Education and was on the CCD Board for over 20 years as well as Treasurer.  He was also a Eucharistic Minister, Lector, and trained the new Alter Servers.   Bob was a longtime member of the Knights of Columbus.   Bob will be remembered as a hard working man who had great love for his family and his church.

A Mass of Christian Burial will be held at St. Margaret’s Church, in St. Veronica Parish, www.stveronicama.org, 111 Winn St., Burlington on Monday, August 23 at 10 a.m.  Burial will be private.